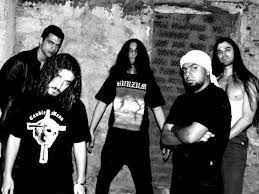 Five talented young men gathered around and put their minds and hands together, to invent some harsh music, and wrote some dark lyrics…and then “Dark Philosophy” was formed

For starters, can you please present the band members and their positions in the band?

How did you come up with the idea of forming a band?

Noor: For years, I secretly sang along my favorite songs. At first I just wanted to try and play these songs just for the fun of it! The idea of forming a band took time to evolve and mature, until we finally took the decision to form the band in summer 2004, with precise goals and ideology, and I guess this grows and evolves as ourselves.

How long have you all known each other? How did you guys meet?

Amr: I’ve known Noor for almost six years now, and he introduced me to our ex-drummer Hesham around that time too. We’ve all known each other for years now.

I read that you started in 2004, tell us the short story of the different members who joined the band, and why some were out?

Noor: We did start as I said in summer 2004. It was only Amr, Hesham and I back then. We’ve seen many members come and go, making a list would be a tedious job! Mainly though, departing members had to take the decision to leave when they felt they wanted to focus more on things like their career, ‘REAL’ career if you’d like to call it, or basically just lost the flare with time. Hesham and Ameera though left to seek better opportunities in music; they both left to pursue formal music education abroad.

Who are your major influences?

Amr: I think this question should start with a what instead of a who. Certainly a lot of things influenced our personalities and mentalities and subsequently our music. We are a troubled generation living in troubled times, I’d say this counts as an influence.
Noor: I believe we are shaped to a large extent by our experiences and environment, the everyday problems of our busy city-life, traffic, relationships, you name it! Definitely music and art in general that deals with issues like these are going to be easier to relate to, and probably make their way somehow into our own music.

What is your music based upon?

Noor: Our music is based on everything ugly. NJ: Why “Dark Philosophy”?
Noor: Philosophy is to think. It is the engagement of one’s mind and reasoning, and also your emotions. In our music we try to reflect what you might call ‘dark’ emotions, or ‘dark’ thoughts, hence the name Dark Philosophy.

Have you changed the band’s name before?

Amr: Choosing the band’s name was not an easy task! It did take some time, but the name Dark Philosophy has been around since 2004, and it’s the name we appeared under on our first live show.

What genre of music do you consider your work to be?

Amr: I’m not big on concrete classification, I see it more of a limitation than anything. We like to call our music Black Metal, simply. We might borrow some elements from various subgenres, but essentially it remains Black.

Why did you choose that specific genre?

Amr: There’s not much choice here, it’s more like that specific kind of music chooses you. Personally, I think Black Metal in its grimness and is the ugliest of all genres. The main theme is not violence, or impulse.. It’s about all that is ugly and filthy.. It can’t get any better than this!

Noor: We don’t like to limit ourselves to rigid rules and likewise a specific lyrical theme. Of course it has to fall under the overall ideology of the band and its members. So far our lyrics have mostly been quite personal, dealing with deep unpleasant emotions and personal experience. We also like to write about our identities and heritage. The thing is we spend a lot of time together, and ideas that later on find way in our lyrics are things we talk about together, and all members make lyrical contributions. NJ: What is more important for you, lyrics or music?

About your German song “Der kleine faust mit Mephisto`geist” what does it mean and what is this track about it?

Noor: The title translates into ” The little Faust with the spirit of Mephisto “. This song is clearly inspired by Goethe’s Faust. Faust is an inquisitive man searching for knowledge and looking for the secret of the universe, in vain. At this point Mephisto offers to help him in return for his soul, playing on his desires and insecurities, and claiming to have the power to find what he is looking for.

What difficulties did you face as a metal band?
Noor: The major problem is that our society is culturally close-minded. Most people can’t see past the cultural differences and are sometimes offended or even feel threatened by what they see as a foreign influence. This cultural ‘monotheism’ is bound to make it difficult for a metal band like ourselves to exploit our full potential and have our voice heard.

Which songs do you play most frequently? Or which do you believe is most demanded by your fans? And why?

Amr: Our setlist has considerably changed in the past year or so, mainly after we finished writing the new album. She-Rose perhaps we played in all our shows. Lots of fans remember The World of Barzakh and Let Me Die Again, although I honestly don’t know the reason. We also got very good feedback on our new material, but we are yet to play more shows and more songs for the first time.

How has your music developed since your first started playing?
Amr: Things look a lot different from how they looked five years ago. The new material is in my humble opinion more mature and sophisticated, and more extreme too. We took the liberty to experiment with a lot of things in our new material and we are quite content with how it turned out so far. Of course we are technically more capable of expressing our ideas the way we want, and writing music isn’t as hard or time-consuming as it once used to be. Perhaps it’d be best if you tell me the answer to this question when you listen to our new album (soon hopefully!)

What is your biggest fear?
Noor: It’s hard when you try to reach out to people but find that nobody understands. This is my biggest fear.

How do you believe you’d overcome this fear?

Noor: We play music because we love it. Keeping this in mind makes you care less about a lot of things!

Do you still remember your first gig? How did the audiences react?
Amr: Vividly! The crowd went wild and the amount of energy was incredible. I still have crazy images very clear in my head up to this day. It was what we talked about most of the time for months to come.

How did you see the metal blast in Egypt? Where do you think its going?
Noor: I’m not sure whether you’re talking about the new concert organizing or if you’re describing the changes in the metal scene as a metal blast. It was never a blast! The scene is certainly making progress, but at the pace of racing snails to put it mildly.
Amr: I strongly believe that sooner or later we will have a strong scene in spite of all our problems. The question is whether our generation will witness it! There’ll always be metal fans, and musicians, nothing on earth can stop that.

What is your favorite band in Egypt?
Noor: Andromida

Which bands did you perform with before?
Noor: In half a dozen gigs we shared the stage with too many bands to list! Of course we consider ourselves lucky to have performed next to too many good bands here in Egypt; bands like Grieving Age, Nervecell, Wasted Land, Deathless Anguish, Tyrant Throne, Bath in Sin. We also shared the stage with too many local bands, I’d hate to make a list out of fear I’d forget someone.

What bands do you wanna perform with?
Noor: Performing next to any Egyptian band is a privilege and I personally wish we could share the stage with all of them. Among international bands I always dreamt of sharing the same stage with Peter Tagtgren, and Moonsorrow.
Amr: Moonsorrow, Deathspell Omega

Tell me about the album you’re releasing soon.
Noor: 50,000 Years is the fruit of five years of hard work. We put so much effort and time into the making of this album, trying to perfect every little detail. I’m more than tempted to reveal a lot more about 50,000 Years but I don’t want to take away from the surprise.

Do you think that you can go global?
Amr: We can, and we will. You’ll see.

Where do you picture yourself in the next, let’s say, 6 years?
Noor: If we knew what tomorrow holds for us a lot of things would have definitely changed!
Amr: I see a band in their early thirties, mostly!

What do you wanna tell your fans and audience?
Noor: I want to tell the audience to let go of their looks and focus more on the music itself, and try to appreciate the trouble bands go through to always deliver their best.
Amr: To our fans I’d like to send heartily thanks, I know Dark Philosophy fans are real devoted supporters and we’d have been nowhere without them.

What do you wanna tell Rock Era?
Noor: This was quite a long interview!
Amr: You’re doing a great job, we desperately need what you’re doing around here.