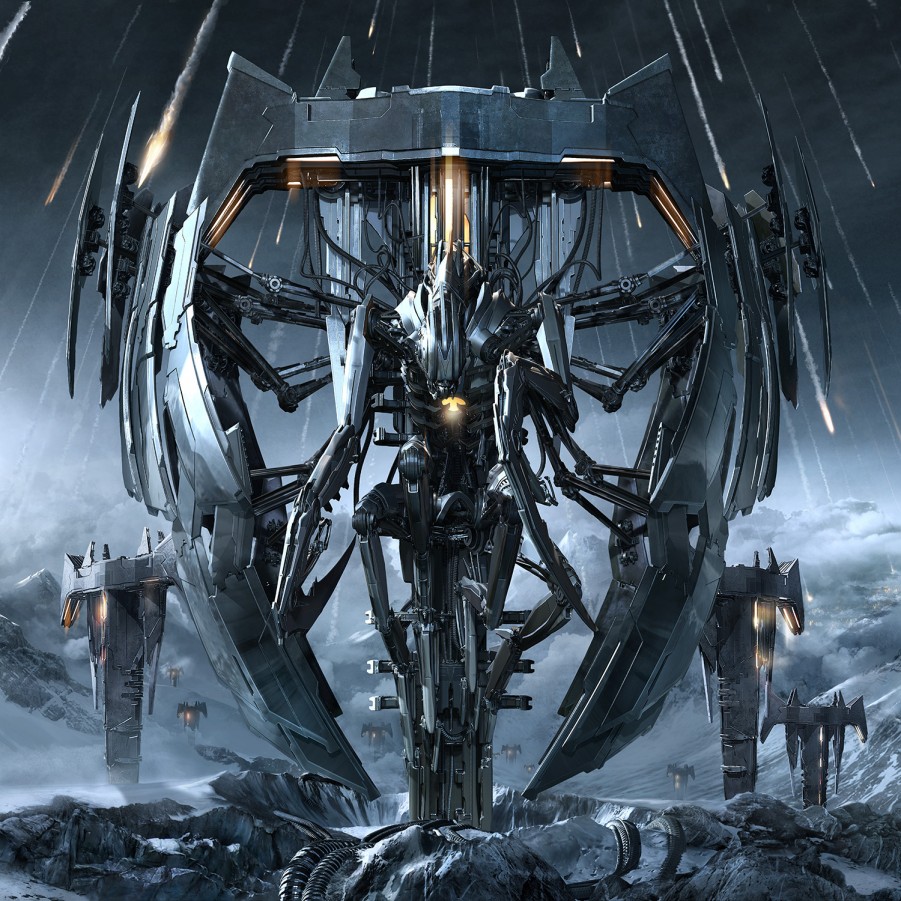 Basically, the album is a good one; vocals, lyrical content, drums, guitar riffs and solos. If most of the songs on this record had something in common, it was the extreme vocals touch after the second verse, I thought at first it was repetitive to do it at the same time in all of the songs, yet I enjoyed it.
‘Brave The Storm’ was track #1. The intro is great; fast paced which is good to excite you about the track. One of my favorite tracks in this album.

Up next, the track that the album holds the title of, ‘Vengeance Falls’. It’s the best track out of all. I like the parts where the extreme vocals come at the end of every verse, and the chorus just makes you wanna sing along. The bridge though was not that much of a favorite, not the whole bridge, just the extreme vocals part then comes that guitar at the end of the bridge… perfect!

The intro of ‘Strife’ is the best intro on this record; the guitars and the bass drums are perfection. At the beginning of the verse, the vocals reminded me of Bullet For My Valentine’s Matt. The chorus is catchy, especially the well harmony between the drums, the cymbals part, and the riffs. The bridge part is heavenly –in my opinion of course- the breakdowns, and the solo. The part after the bridge where the track ends with “And I struggle to find my WAAAAY”; Oh yeah I like that part.

And ‘No Way To Heal’, it was nice to work on adding the extreme vocals inside the verses. The chorus is just catchy, the most catchy part aside from the lyrics, the vocals, there’s that I don’t know what they call it but when he sings “I’m all out of Tiiiiiihiiime”, that part makes you want to kiss the vocals… not the vocalist, just the vocals. The last part of the guitar solo though, it catches my attention more than the whole solo. Definitely one of the best tracks here.

The kind of vocals –or singing- in the verses of ‘To Believe’ is not my favorite, the chorus’s vocals is way better. The guitar solo is a good one in this track, not great but good.

First time I listened to ‘At The End Of This War’ I thought it was an acoustic one. Good job tricking me. I like the acoustic part though; the vocalist has a unique voice, on of a few unique vocals in the scene. His vocals has the ability to sound good at any condition…or type of singing style. Although this track is not one of my favorites and maybe my least favorite, I admire the vocal work in it.

‘Through Blood And Dirt And Bone’ is also one of my least favorites, it’s nothing more than that I am not feeling the music of lyrics. It’s a matter of opinions anyway.

‘Incineration: The Broken World’ is not one of my prized choices either. Although it’s as heavy as those who are in my favorites list, this one hasn’t really got me into it. The guitar riffs are okay, the vocals is beneath average… it’s not bad but the style of singing through it is just not that good to me. To be honest, the guitar solo is a goodie, though it was smooth and low.

‘Wake (The End Is Nigh)’ may not be one of my favorites but it’s not on my least favorites. I really like the vocals; it’s sooth and calming. The chorus is a good one, the way they made it is really very good and when the extreme vocals come in, it becomes pretty interesting. I admired the drums through the extreme vocals right in the chorus. You can say my favorite thing about it is the drums… oh wait; my favorite thing in the whole album is the drums.

And here’s to one of my dearests, ‘No Hope For The Human Race (Bonus Track)’. I really really LOVE it. The vocals are really good in the verse, the use of extreme vocals switching with clean ones made it really good. The drums through the chorus, at the beginning of the chorus to be specific, are catchy. Right after the chorus ends the second time comes a part that contains the solo in it, and the whole part musically is a good one. Aside from that, the lyrical content is interesting; yeah I agree with them, there is no hope for the human race.

‘As I Am Exploding’, the intro reminded me with the music of Five Finger Death Punch, though they are one of my favorite bands, I am not that fan of the intro. I can relate pretty much to the lyrics and I just like the chorus, lyrically and vocally, it is quite attractive. The bridge part is an average, but I like the guitar riffs with the snare drums appearing through. For me, the solo isn’t right for this track, I don’t know, maybe.

So the last one on the album is ‘Skulls… We Are 138 (Misfits cover) (Bonus Track’. I haven’t listened to the original track by Misfits, but I’m sure it’s better than the cover. I felt like the vocals didn’t go well, like it didn’t fit to be singing this track. It needed to be lighter to fit.

I pretty like “most” of the album. If you are to listen to this album, then I recommend you start with my list of favorite tracks. They are my favorites for a reason, personally I pay much more attention to the drums and the vocals… and maybe the headbanging factor. So yeah, I really love the drum work on this album, hail to the drummer.

Reviewed by: Nehal A. Ali
Edited by: NJ Bakr