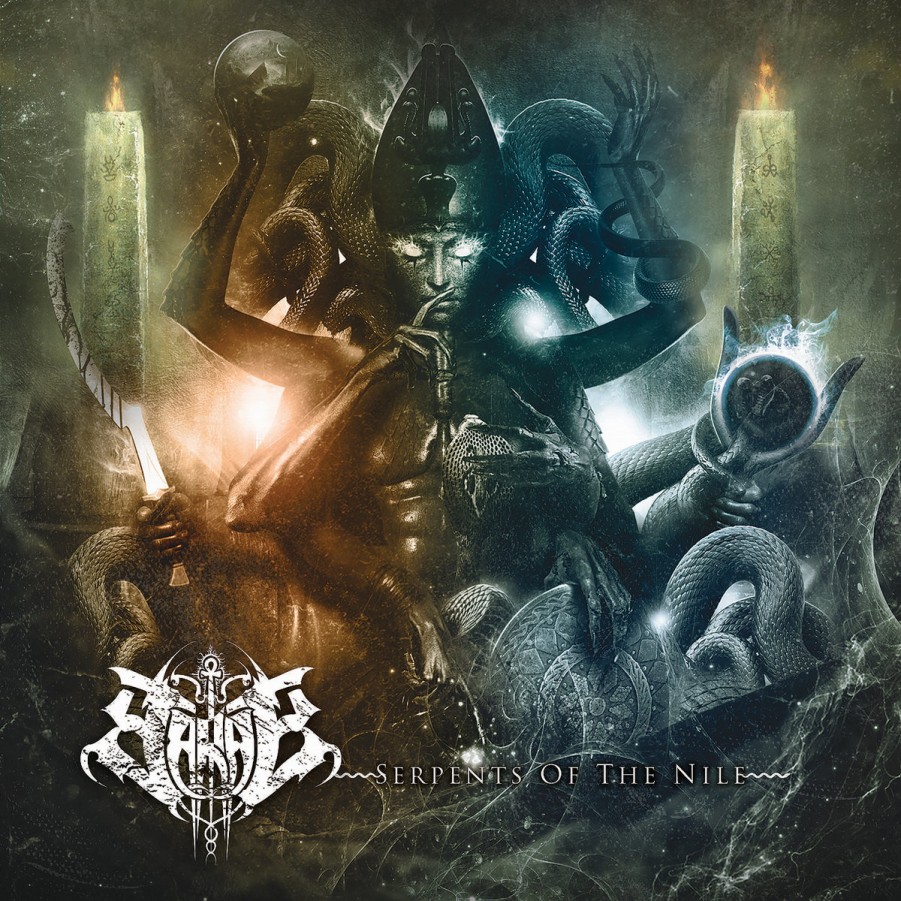 “You will review Scarab’s album”, when I read this sentence I felt proud because everyone in the Egyptian Metal scene knows who Scarab is. And it would be a golden point in my career at Rock Era Magazine. It is one of the most successful Death Metal bands in the local scene and we could say that it is the only international band along with Crescent among the Egyptian Death Metal music and they are masters. So, let’s move to review Serpents Of The Nile.

Serpents Of The Nile is Scarab‘s second full length album. The Album contains 8 original tracks, they are:

I want to discuss the title and the concept of the album. First, “Serpents” in general or “Snake” carries on itself a kind of symbolism. If you think of what the special thing in “Snakes” is, you will find out something very interesting; the snake is the only creature in this universe that can change its skin and have new skin. This idea is used as a symbol to the idea of rebirth.

Ok, this is the idea behind using “Serpent” in the title, what about “The Nile”? Questions were running through my mind. The answer is very simple, if we go back and check the biography of the band we will find that they extract their lyrics from philosophy and mythology, especially those that are related to the Egyptian culture, history and mythology. Even the name of the band comes from the Egyptian history. For more details about the title of the band and more info, check.

The ancients believed that the Nile was the line between life and death. One shore was the sign of life and the other one was the sign of death (so the pyramids were built on the western shore and they chose the west relating to the sunset). They believed in Life after death so they were deeply concerned with the process of mummification to keep the bodies of their deceased in the best case to reuse it through its next journey after death.
So, we have a concept album here which tells the whole album is a journey into becoming a creator of your own destiny.

The album cover symbolizes a man that has reached the state of being in unity with his true will, after the death of all fear, weakness, and ignorance. He reaches that after gathering the qualities and intelligence of all the Gods and Goddesses he met throughout his journey. It is a journey of an inner rebellion, of a spiritual alchemy and mystical rankings – as the band explained through the album’s booklet-.

Every track narrates a part or stage of the journey and every track has its own message and its own wisdom. For example, the first track ‘Calling Forth In Ancient Spirits Of Kemet’ has oriental touches and some sounds of magical thoughts and this whisperings around and the tones of the guitar with the oriental influences which reflects the intention of this deep journey and the inner fights in the mind. Scarab chose an excellent intro for the album to steal your soul to the land of Kemet, just forget yourself as the journey’s hero did and be ready for visiting this land. The word “Kemet” carries another reference to the Nile, because the ancient Egyptians called Egypt “Kemet” or “The Black Lands”, because of the fertile black soils of the Nile flood plains.

‘Calling Forth In Ancient Spirits Of Kemet’ is not just an intro for the album but it is an intro for ‘Visions Of The Blood River’ track in particular. The track reflects the beginning of the journey. “Choose your vission” is the inner order to reback your freedom and correct your theories.

‘The Spells of Coming Forth By Day’ is just a continuity for the inner fight and continues for self-criticism. Then, ‘Serpent Of The Nile’, Scarab‘s hero now is on the middle of the road and the track arises the idea of the rebirth and willing for wisdom, knowledge and the truth. “Bring in me the wisdom from high above; bring me the strength from down below, bring in me the gift of wise choice.”

The upcoming one ‘Pyramid Of Illusions’ discusses the idea of fighting, you are human greater than the pyramid which all people consider it part of gods. It tells us another moral to make your own way to be your own controller and don’t follow anything because if you do that you would be just nothing.

People with will made a pyramid and people without will became nothing. “A Pyramid made from humans, made of humans, all climbing for illusionary power.”

Now our hero reaches one of the absolute truths, death, as he is watching the funeral with feelings of fear of the unknown. For example, the judgment day which is symbolized in mentioning Maat, the Goddess of law and truths. That’s the idea of ‘A Funeral Pharaoh’ then ‘The Afterlife Illusions’. Now rearranging his new life again and thinking deeply, “From failure of this life we hope for success in another life, waiting for the day we die to know the unknown to feel what we’ve never felt before”. Finally, the last stage of the journey ‘Days Of A Burial Mask’, our hero reaches the strength he needed to reach and killed his fear. “This is the day of burying a mask, burying the mask of fear.”

Let’s move to the musical part; all melodies of the album are highly aggressive and wild. They reflected the nature of the concept. Human’s inner fight is harder than any wars between 2 kingdoms or emperors because when you win, it means you’ve killed a part of your soul. You are the winner and the loser at the same time.

All the tracks of the album except ‘Calling Forth The Ancient Spirits Of Kemet’ and ‘Funeral Pharaoh’ start by the same style. Some tones and guitar follow harshly with the vocals to keep your attention till the end of the journey to discover your own self again and get morality and wisdom from Scarab‘s hero. All instruments are excellent and the solos are great by a high degree.

I could feel some oriental touches in the riffs within some tracks as the part from 3:37 till 4:06 of ‘The Spirits Of Coming Forth Day’ and the part from 6:38 till 7:30 of ‘Funeral Pharaoh’ carry oriental influences and touches. All tracks carry some effects from the intro track ‘Calling For The Forth Ancient Spirits Of Kemet’ to connect all the tracks of the album to each other to keep the unity of the concept and journey and keep the harmony between melodies and riffs.

There is no doubt that Serpents Of The Nile is an excellent album and Scarab is an extraordinary band. The Album is rich with melodies and tones which will force you to listen to the album more than just once.

The cover also highlighted the concept as we can see; divided into 2 parts with 2 different colors to reflect the good and evil sides of the person and human or pharaoh who is called “The Hero of the journey”. I gave the main character this name to make it easier to the reader, Snakes or Serpents, our main symbol, weapons sing for fights. There is another point if you focus on the face of the pharaoh, one of the evil hands is put on the good side’s mouth to keep it silent but one of the good sides hands try to be free from the snakes which surrounds it. It is my own vision to the cover. The Cover is as the band mentioned in the booklet, “The Dark Chamber Of The Elder Serpent God”. The Rate is 9 out of 10 and my favourite track is ‘Funeral Pharaoh’. YOU should listen to this album.