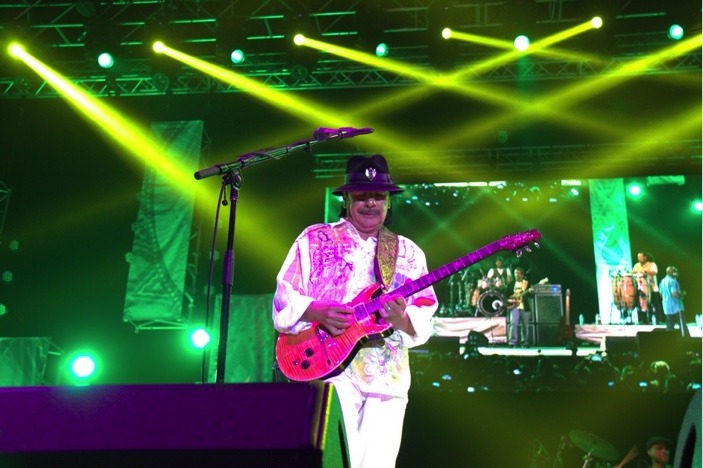 The Jazz Festival takes place every year, at the grounds neighboring the Badia Golf Club, and is a venue for witnessing many international artists. The organizers of the Jazz Festival never fail to grant their audience a chance to watch a legend perform live, and for this year we were lucky to experience Carlos Santana rocking us to the tunes of his guitar.

The concert started at 10pm sharp, and the venue was packed. It’s definitely one of the most crowded concerts I’ve attended in the past year or two. Front and middle pit tickets were completely sold out, a few hundred regular admission tickets were left over. The concert was expected to receive more than 14,000 attendees.

The regular admission pit was very crowded, it was a struggle to even get remotely close to seeing anything of the big screens depicting Santana. The fan pit was slightly less crowded, due to the fact that a lesser number of fan pit tickets are sold. Even though the number of fans attending the concert was huge, everyone was in a good mood. There were no fights or quarrels, everybody was jamming to the music, enjoying and dancing.

The sound was impeccable, which hasn’t necessarily always been the case for concerts at this venue (Megadeth 2013 if anyone remembers?) The stage set up was great, so was the coordination of the lights. The big screens occasionally showed small clips of Santana’s videos, African Culture or Cuban beaches. It was all really bright and happy, which contributed to the show’s laidback atmosphere.

Santana himself seemed very down to earth and relaxed while playing, not seeming to be performing in front of a 14,000-15,000 people audience. He was striding along the stage, chewing on a gum and playing one amazing tune after the other. His solos were supported by percussion instruments of his band and occasional backup vocals. He performed classics such as Maria Maria, which immediately enchanted the crowd, or Black Magic Woman, which immediately took us back in time. The blue’s influenced solo was amazing, and so was the transition between different music styles and instruments. Smooth was played rather towards the end of the concert, but the minute the crowd heard the first seconds of the riff almost everybody was dancing to the Latin tune. Santana‘s set list included something for everyone, diehard fans who knew every single note he was hitting, and people who just enjoyed good music and were familiar with the classics.

The 66 years old guitar king definitely showed his audience that he is a legend and attending his concert was an amazing experience. There were no technical complications, the sound and the lights were working great and the organization of the concert was very well handled. All that combined with the amazing music and a good atmosphere of the crowd contributed to make this show an amazing and extremely enjoyable experience.