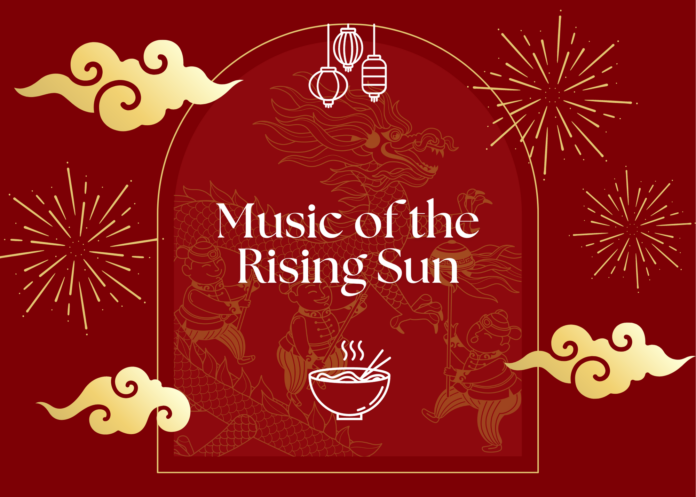 It is believed that Japanese music was originally influenced by China, since it is also based on 5 tone scales, moreover back then China was the primary source of education to East Asia in general and Japan in specific, but you can’t say for sure that it was the only source.

The main pillars of Japanese instrumentals were; Shamisen -3 stringed zither-, Biwa –Lute-, Taikou -drums-, and shakuhachi -Bamboo flute-. Old popular songs were known as zokuyo -literally translated to ballad-. These songs had no western influences, and the instrumentals used are nothing similar to the ones used nowadays -although Shamisen and Taikou are still very popular in Japan until this day, especially in traditional festivals-.

If you take a closer look at the previous instruments, you can easily figure out that unlike western music, Japanese music use solid elements to produce natural sounds of life. The musician’s self-expression is minimized almost to none, which many westerners inferred from that there is minimal emotion in Japanese music or it is rather “cold”.

Stereotype Japanese music can be classified as:

How Japan came to love Jazz

• You might be wondering how modern Japanese music started? The answer to that question might shock you. In the 1920s and 30s, French chansons became popular in Japan. Why? Because frilled dresses, perm hair, petticoats, and ribbons meant royalty and class. The definition of beauty has changed and many people started ditching the old image of beauty in Japan to replace it with the classical modern standards of Europe. Immigration to Europe became a trend and composers of that era started to introduce western music to Japan by mixing rhythms together to add a spice from the west to their traditional music. Most notable of those was Kunihako Hashimoto who was a great success at that time thanks to his real talent of mixing the emotions from western music with his traditional Japanese music which can be heard clearly in his masterpiece titled:

• By the end of the 1920s, Tango, Jazz, Hawaiian, and Waltz were introduced into Japanese music scene in the form of dances such as the foxtrot and rumba. One notable band at that era was the Haida Brothers who immigrated to Hawaii and returned to Japan in the 1920’s as the country’s first Hawaiian band and thanks to them ukulele gained huge popularity in.

• During their travels to Europe. Early pioneers encountered new sounds and new genres they never heard before. But due to the lack of resources at that time most of those young aspiring Japanese artists had to be self-taught, and self-motivated. A leading group known as Happy End formed a new music genre -inspired by Bob Dylan- became one of the most influential groups and the pioneers of electric music in Japan. They were one of the first producers of Japanese video games soundtracks, The band successfully introduced rock and electric music in Japan.

So at the end of the day Japanese Music has developed and changed a lot over the years, in the following topics we will introduce the most popular and most unique genres of Modern Japanese music. So stay tuned!

Call Me Master by Master Dy