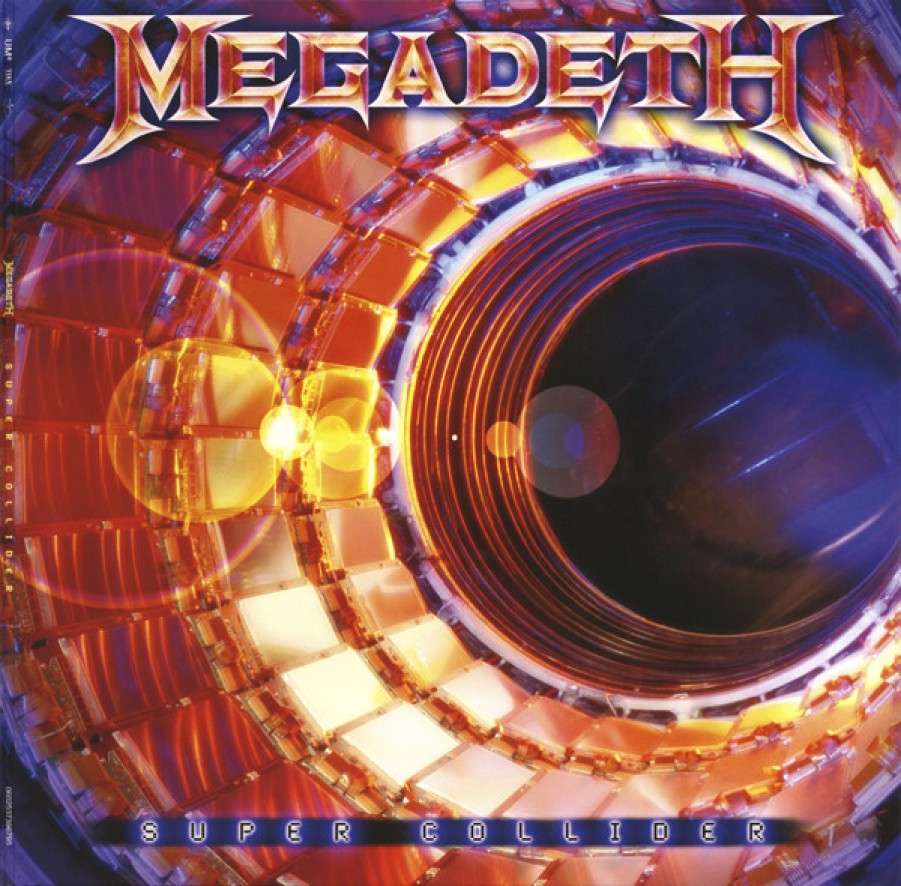 Megadeth‘s latest album; Super collider, is not a super collider at all. The album is supposedly a Megadeth album, one of the biggest bands ever been. The big four, defender of the galaxy, countless titles and the list goes on, but what I heard here was more like a jamming session.

What the band did, was basically just sit together, get beer or whatever they like drinking, and start recording, wouldn’t even say they listened to the riffs, because it was commercial, and in music you got 2 of songs, the good “Oh my god, I love that melody” type, and the catchy “Baby baby baby ohhh” type. Well lads, that was neither. I don’t like it, nor do I remember anything of what I heard.

The album has 12 tracks and only, it seems, 1/4 are good, while others are just all right. ‘Kingmaker’ as almost perfect, as it is the opening track, and gives that feel – rather delusion – that the album is a kickarse that will stun, has some sweet melodies, shredding is rather nice, not as much solos as they used to have so it was alright, has really nice riffs, and it sounds like a proper Megadeth album. Comes then the annoying ‘Super Collider’ and ‘Burn’ giving you the feeling that you’re listening to a rock album, more like a rock jam, with the commercial riffs, and the very normal mid tempo track and easy lines. ‘Built for War’ then comes to try to fix everything by sounding like it’s on the same page as ‘Kingmaker’ as these are the only 2 songs I liked and felt like am listening to Megadeth.

‘Off the Edge’ and ‘Dance in the Rain’, I don’t think we would need to talk much about the names where they sound like 2 songs from Disney. Forget about the rocky groove in these 2 tracks, the riffs on ‘Dance in the Rain’ are not horrible, they are a wee mellow and they fit very well with the drum groove, I really liked the pedals/bass groove on it, but sadly it drifts from good to bad, then a shredding solo that doesn’t feel good, yet it takes me back to Megadeth good old times, but suddenly they have a weird effect on vocals that felt like Rammstein with a horrible drum/guitar groove that just wrecks everything.

‘Beginning of Sorrow’ has the perfect bass line intro, that says something like “Hey we’re back”, but then they hit you in the face with “Beginning of sorrow, there’ll be no tomorrow” and it suddenly feels like a Nickelback album. Even the harmony vocal line, along with the harmony guitar line feel so ordinary and commercial, somehow feels very commercial, but the solo somehow feels good, sweet and mellow. The bad thing about it is that the song feel doesn’t change at all, and it goes on till the end of the album.

However, the album has a guest appearance; Disturbed‘s David Draiman on the track ‘Dance in the Rain’ which sounded, quite alright.

In conclusion, the album is very commercial, with a thrashy effect is all, cute shredding and such. So, don’t expect any thrashy big score on this album for you’ll be disappointed. Basically, with music like today’s music and with big bands only releasing albums for the sake of only releasing stuff with the “Goodbye cruel world “theme to it; I reckon you listen to the album, only to add it your library as “Beginning of sorrow”! The album is roughly a 4.5/10.