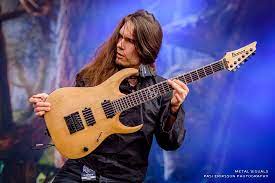 Rana: Finally, I am interviewing one of Wintersun members. Actually, this band is one of the most favorite bands. Thank you so much, Teemu for accepting our invitation to this interview and for being with us today.

Teemu: Hey Rana, actually, it is my first interview with a Middle Eastern webzine through Zoom, so thank you for having me here;
Rana: So, let’s warm-up together and let me ask you about your relationship with Middle Eastern bands and musicians.
Teemu: Well, the first name that comes to my mind is Equilibrium’s drummer “Hati”, he is from Israel, although Equilibrium is a German band. We have played some festivals together and have gotten to know each other over the years.

I guess Orphaned Land is probably the most known metal band from the Middle East. I also know Melechesh, having seen them live at 70000 Tons Of Metal in 2015. I’m also a fan of Blackfield, so I know Aviv Geffen from there. Other than, that I’ve also had some students from Turkey and Saudi Arabia.
Rana: So, after this warming up, I need to start with “Time I”, it was your first album with “Wintersun” as you didn’t catch the very first album “Wintersun”. This album means a lot to Egyptian metalheads as they are big fans of Wintersun and it means a lot to me too. So, can tell us more about TIME I and your memories of your early days with Wintersun?
Teemu: Before answering your question, I had a quick check of the countries we have the most Facebook followers from and actually, Egypt was there, I think the fifth. So, it is like what you said about having a lot of fans there which we appreciate a lot.
I joined Wintersun three months after the first album came out.

To go a little bit back in history, Wintersun originally started as a solo project by Jari as he had songs that didn’t fit for Ensiferum. In 2004 Jari had booked a studio to record the first Wintersun album and the schedules didn’t match to Ensiferum’s touring plans, so Jari decided to quit Ensiferum in order to focus on Wintersun. Jari asked Kai Hahto to play drums and the two recorded the self-titled “Wintersun” debut during the first half of 2004, and it was released in September 2004.

After the successful reception of the album, the record label asked Jari to put a band together for live shows so he started looking for members.
Jari knew Jukka Koskinen from Norther and asked him to play the bass. Jari had originally asked his childhood friend and Ensiferum drummer Oliver Fokin to play the second guitar, and Oliver can be seen on the Beyond The Dark Sun music video, which was filmed before the album release, but soon he decided that not to continue in Wintersun. In October 2004 Jari announced on the Wintersun website that he’s looking for a guitarist and a synth player, and I sent him a message to ask about the audition.

We talked and I sent him some audio clips of me playing the guitar. After live auditioning about 10 potential guitarists Jari couldn’t decide between me and another guy, so he Jari gave us the guitar tracks of the first album on a CD to learn in a couple of weeks. Then after the final live auditions, he chose me and I was the happiest guy ever! This was Christmas 2004.
In early 2005 I met Kai and Jukka for the first time as we started practicing together. In summer 2005 we started playing live shows, the first couple shows in Finland and then internationally as well. In December 2005 we had our first bus tour across Europe supporting Exodus and Hypocrisy, which was really magical! I was 18 years old at the time.
In May 2006 we started recordings for the TIME album – which was still supposed to be one album at that point – and I got to visit the legendary Sonic Pump Studios for the first time and see what professional studio work looks like. That was all very exciting.
Later in summer 2006, we played again some big festivals.

Performing at Wacken Open Air in front of approximately 40000 people was one of the most memorable experiences. At the end of 2006, we also got to tour with Amon Amarth and Tyr. Those were great times!
Rana: So regarding the “Wintersun” album, how did you feel when you listened to the album for the first time?
Teemu: I first saw the music video of “Beyond the Dark Sun” – I think right before the album came out – and I became a fan of the music immediately and went to buy the album.

I had known Jari from Ensiferum but for me, the “Wintersun” album was something totally fresh. I felt it had a really nice mix between various styles and moods, and a lot of interesting guitar riffs, melodies, and solos; great vocal performance and lyrics; awesome blast beats and the kind of drumming I had never heard before; and moreover – really awesome songwriting! In my opinion, it is a perfect album. I listened to it every day back in 2004-2005 and I love still to listen to it nowadays.

Rana: You were attached to the music since you listened to it, so from being a fan of Wintersun’s music to a really active member in the band, Wintersun music is really unique, I can see the landscapes of Finland and its nature through the music, it seems so visual. How does the process of writing such music go as you participated in “Time I” and “The Forest Seasons”?
Teemu: Jari is very much the mastermind in Wintersun and the songs are all written by him. He usually has a clear big vision in his mind but of course, sometimes he asks our opinions and thoughts on the songs as well.

He has so many ideas in his head that coming up with strong songs never seems a problem for him. But he’s also very particular about sounds and production so recording and mixing is usually the harder part. We, the rest of the band members, try to help him with all the practical things and everything that is needed “behind the scenes” to run a band.

So, going back to Time I: After completing the basic drum, bass, and rhythm guitar recordings Jari started working on the orchestrations. With his vision growing and getting clearer along the way he was always learning more and more about making and arranging orchestrations but at the same time, he was facing a lot of trouble with his computers which could not handle the huge song projects.

After finally finishing the orchestrations, recording the remaining vocal and guitar lead/solo tracks, and having also learned how to mix himself in the last years, Jari mixed and mastered TIME I and it was released in October 2012. After that, the band had a long touring period lasting for almost 2 years.

Rana: Regarding Time II, when will the album come out? This is the question of every Wintersun fan! Is Time II is already written?

Teemu: The basic songwriting for the whole TIME album was completed around 2006. Most of the music was written between 2005-2006 and some ideas even before that. In 2012 the record label had the idea to split the album into two parts and so TIME I was released first. Jari was trying to work on TIME II in between tours but eventually, around 2015 it became clear for him that he was not able to finish TIME II as he wanted with his current gear and possibilities.

Thus TIME II was put on hold and the band started planning a crowdfunding campaign to fund those better music production possibilities. The Forest Seasons album, with more simplistic production, came out of this situation and was a great start to our bigger crowdfunding project, which is planned to be three parts and three albums in total. Currently, it is still unclear when Jari will be able to finish the TIME II album, but most likely it won’t be yet the next album coming out.
Rana: Moving to another point, why does your relationship with fans on social media look controversial? There are a lot of discussions between the fans, and Jari.
Teemu: Yes, I think a lot of that is because of misunderstanding the crowdfunding and also our new Patreon community. I have to say I do understand fans sometimes being irritated having to wait for new music for a long time, and I think Wintersun has always had an amazingly supportive and loyal fanbase, which we are very grateful for!

Also, unfortunately in social media, even a smaller group of people with negative things to say often tend to be louder than the majority who try to stay more positive. And when somebody is misinformed we try to reply to comments to help them understand the situation better.
When we announced the crowdfunding the fans were expecting the release of “Time II”, so we explained in detailed documentary videos why there is a different new album, what the “The Forest Season” and the crowdfunding are, and that we hoped our fans to buy the album in a presale directly from us along with “The Forest Package” so we could eventually fund better conditions for Jari to work on the music.

Because of totally different, more simple approach to writing, recording, and mixing The Forest Seasons, the whole album was done in only about 9 months between 2015-2016. After that, we meticulously planned and prepared the first part of the crowdfunding campaign in secrecy before announcing it.

The campaign run between March-April 2017 and the album and all the extra content was released in July 2017. From then on we had an active touring period for 2 years after which Jari has been getting back to writing new music again. He’s been actually very productive lately, but he has also learned from the past not to announce new music before it’s actually ready. That’s why sometimes it might seem that the band is inactive between tours because there might not always be frequent updates.

Currently, Jari is working on new music all the time and once the next album is getting ready then we put our heads together to plan and prepare the next part of the crowdfunding campaign.

To offer the most active Wintersun fans more extra content and at the same time keeping the band active even between tours we decided to create a Wintersun Patreon community at the beginning of 2020.

It launched in April 2020 and includes exclusive weekly videos, a forum, podcasts, and other content from all the band members against a small subscription fee. We’ve had a lot of fun doing the Patreon, especially our monthly video podcasts together! As the amount of content keeps on growing weekly we hope that more and more fans will eventually find their way there!

That was our first part with Teemu Mäntysaari so stay tuned for the next part!

Interview with Near Death Experience (NDX)