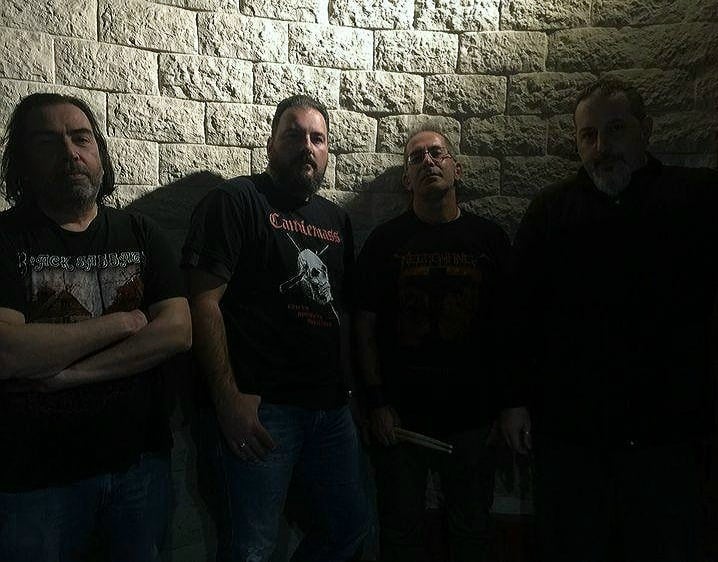 Q: First off, then you Manos for having this chat with us. So, you are getting ready for rocking the stage at The Room of Doom, How did you get this chance?

A: Hello Rana and thank you for the interview and your support. On 5th October 2019, Selefice will be indeed on stage in the 2nd edition of The Room of Doom Fest. The story behind it goes like this: I attended the first Room of Doom Fest in 2018 and in-fact was pleasantly surprised with the great job Spyros did with it.

All bands were carefully selected, the program runs smoothly, everything flew according to the schedule and the whole event was a night to remember.

I contacted Spyros a few days later to congratulate him and it coincided that he is a Selefice fan from the band’s early days. The rest is history!

Q: A few months ago you released your first EP “I met a God” after your comeback, What are the main themes of it? And how was the process of music writing?

A:  “I Met a God” is the comeback EP of Selefice after a 25-year hiatus. We are very proud of it and it perfectly depicts the band’s current status.

Miltos is responsible for the lyrics which deal with paralytic inner fears (Mora), war in the name of God (KolHaneshama), Religious paranoia (I Met a God),
eternal damnation and witchcraft (Damned). Except for “Damned” which is a 1994 unreleased song that was deservingly recorded as it still sounds fresh today, Miltos came with every song’s spine ready. We jammed in the studio over his ideas adding our perspective.

The whole result was perfectly captured by Savvas Betinis (Acid Death) and we self-released it on CD.

Q: Selefice was formed in late 1991, And you spent many years absent away the stage, What are the major changes that occurred in the Greek Metal Scene?

A: The scene lost the newborn feel of the first days. The internet changed the way we communicated music with reel, demos, tape trading, webzines and metal club or record store meetings on the weekends. In the early days, more bands were in search of an original sound. Unlike the past, today we have more good players in their instruments. Some Greek bands are known worldwide and make the Greek Metal scene proud.

Q: Is the Doom Metal Scene in Greece in a good position or facing some challenges?

A: Greece is best known for its black metal scene. Nonetheless, doom metal has ever been present, but the listener needs to search a bit deeper for it.

Since doom metal, as was taught by Black Sabbath, is the basis for everything, Many bands engulf it to their sound.

Styles like doom/death and funeral doom have given us great works and a new definition of the “doom” use.

Q: Did you contact any of the participated bands in the upcoming Room of Doom?

A: We are not in straight contact with them, but we are more than pleased to share the stage with great bands like Clouds, Inner Missing, Shattered Hope and Soul Dissolution. We are looking forward to meeting the bands in the venue, make new friends, and share the stage and a few drinks.

Q: Is there any guest musician or new singles to be performed in your upcoming performance?

A: We don’t have plans for a guest musician this time. About the setlist, we haven’t decided yet, but I am pretty sure we will play songs from both

Finally, Send a message to the Greek Metalheads who are going to attend Room of Doom

The Room of Doom is an excellent fest that deserves your support.

Selefice will open this year’s show, so be there early and witness hell with your very eyes!