Stratuz are a doom death band hailing from Caracas, Venezuela with a lot to offer. They are set to drop their new record “Osculum Pacis” on the 26th of April 2022 via Sliptrick Records and to spice things up, they released their 2nd single off it “Morning Star”. Stratuz are Franklin Berroterán (Vocals/Keyboards), Gerónimo Egea (Lead Guitar), Leonardo Rangel (Bass), Diego Cabrujas Palacios (Drums) and today, we’ll get to know them more.

Stratuz is a proper name, in the beginning when the name was decided it was based on a play on Latin words, but it ended up being an original name to which we even gave its meaning as “The dividing line between good and evil” for this very reason the Z at the end is like the S in reverse and the letters T make the functions of two crosses, the first one being inverted.

My first encounter with extreme metal was through bands like Venom, Possessed, Hellhammer, Bathory, but at the same time also with Black Sabbath, Witchfynde, Blue Öyster Cult, Tangerine Dream, as well as classical music, something eclectic you could say to be able to walk from one extreme to the other, nevertheless, in Stratuz the labels of styles always gives us a lot of work, because we look for each song to have its identity, we can find songs very far from each other in terms of style, but keeping the same essence of the band. If there is something where all the songs coincide is in their atmosphere, we look for the songs to be sonically descriptive.

South America is very passionate and has a lot of energy, to this we add the amount of injustices that our people live and the need to make catharsis through music to drain so many ailments.

The most unforgettable tour was definitely the European tour of ’98 with Avulsed, Centinex and Anasarca which took us through most of Spain, Portugal and then Germany which was where we closed our tour.

For this album, before the first chords were written, the concept or sketch was already clear, in this sense, we proceeded to develop the songs and make some kind of demos which were rough stones, then they were carved and polished together with the lyrics and the orchestral arrangements so that they had the desired balance.

The need to show the other side of the coin, to generate enough curiosity for people to immerse themselves in history and study and find their own lights, I would not be surprised if some find coincidences of the misuse of the word Lucifer from the publication of Dante’s work, or contradictions such as Luciferism within Catholicism from the bishop Lucifer of Cagliari and the various schisms.

The album is ready for pre-order from Sliptrick shop here.

The sound of the album is very energetic and at the same time is like velvet, it awakens many sensations, all the songs are like a whirlwind that go from less to more, each song surprises you as it develops. There are elements in each song that you don’t expect. Even when you listen to them again, you find chords or melodies that are intertwined in such a subtle way that at first glance you might not notice them. There is no favorite song on this album for me, as the whole work seems to me to be a single piece, I see it as a whole. 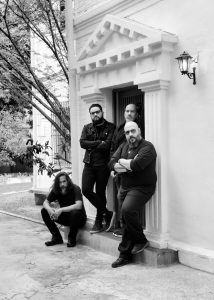 Yes, in the song “Dawn” the soprano voice was provided by Karen Pita as a guest. She’s a great friend who is a multi-instrumentalist and at the same time a singer, among other arts.

“Condemned”, as it summarizes all the strength of Stratuz from beginning to end. This song has all the elements used in “Osculum Pacis”, it is a song that takes you by the hand from the beginning with very dense and dark passages and then it develops with a lot of strength and at the same time balance until it generates in you an overwhelming euphoria.

We already have that dream, now we have to work on it, so we keep it to ourselves while the ideas develop internally, but it will be devastating.

Thanks for your time guys, wishing you the best of luck and loads of success. Cheers!