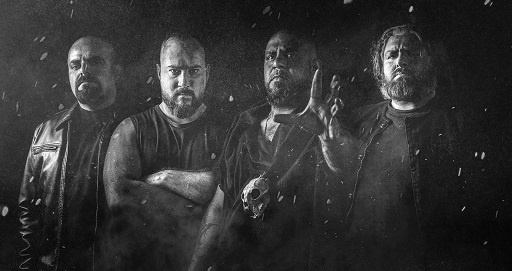 Can you tell us the details of your single ‘Siren of Truth’? What is thetheme? How long did you work on it, what’s been your inspiration?

‘Siren of truth’ was actually a simple song in terms of writing. Composition didn’t take more than a few sessions to put together and jam it out. We wanted to go for a more “in your face” approach to our music with this one and we think it came out pretty good. The track is about a fictional creature, a siren, that is appears to be a beautiful and wise being but is actually a destructive force on its world that damages anything in its path.

Tell us more about your upcoming album?

We’re aiming to have the album complete by mid 2016, we have a good number of tracks and a strong lyrical theme, but it still has a long way to go before it’s complete. This album will mostly be about the problems we as humans are creating in this world. There will be a lot of imagery and fantasy in the way the stories are told, but at the core of each will be some truth relevant to the way the world is today.

Congratulations for 10 years of being a band in Bahrain – can you give us tips on what it takes to be a successful metal band in the Middle East?

It’s really a matter of constant hard work and a humble attitude that got us through for this long. Be supportive of the scene around you and let the music do the talking.

How are you celebrating 10 years as a band?

We celebrated it by releasing our single, ‘Siren of Truth’, on the date the band came to life 10 years ago, and also launching our website.

What has been your greatest achievement in the past 10 years?

Being recognized for what we do is the best thing a band can ask for. Over the past 10 years, we have opened up for bigger bands, communicated with a lot of important people from the global metal industry, and honored to have actually been a part of the rise of metal from this part of the world.

What are your aspirations for the next 10 years?

Same as it has always been. Put out more good music, meet new people, and discover new places.

Any shows outside the Middle East?

As of right now, all our shows have been in Bahrain and Dubai. Outside this region, we have been offered a few opportunities but the cost can become too much to handle as a lot of these offers don’t cover all expenses to get us there.

Are you the original members of the band?

What does a band need to do to stick together in your opinion?

The best thing that has worked for us is to realize that disagreements are part of what shape the final masterpiece. Many of us struggle to find good enough musicians and it’s even harder when you need someone that can share your vision and your sound. Many of us are so protective of that vision that it becomes difficult to allow other people to complete it in their own way. Secondly, it’s a responsibility. It’s a hobby that needs to be treated as a job. Hard work, honesty,and camaraderie!

Of all the things you could have been in life, why an extreme death metal musician?

Because why not 🙂
All of us need to express ourselves in the way that best represents us. We’re proud of this music, we listen to it all the time, and we’re huge death metal fans.We didn’t choose this style for any specific reason; it’s simply where our passion.

Have you guys had any plans or recent news in the past month?

We’re continuing the writing process for the upcoming album. Been experimenting with a lot of new sounds and concepts and it’s really starting to take shape.

Would you like to tell us about what happened with Nader Sadek‘s concert?

The event took place and was a success. We regret that we weren’t able to make it due to some personal circumstances that prevented us from traveling. Rest assured that we’re definitely planning a strong comeback

How do you promote the band in terms of marketing and gigs? How does itwork out for you in the Middle East?

Using gigs, as a promotion tool is a little trickier in our case because we don’t getto play in as many shows as we’d like to. Sadly this is due to the small number of shows we can put together successfully in Bahrain. Instead we rely mostly onsocial media, like any other band.

Which bands do you want to share the stage with?
Slayer, Vader, Venom, Marduk. Just to name a few.

Tell us about your favorite concert.

In terms of performance, maybe the strongest show we put on was at theResurrection Dubai gig (March 2015). The feeling was intense and theperformance went really well. But truthfully speaking, nothing beats a show in ourhome country. The Metal Meltdown gig in Bahrain (March 2013) was really anamazing memory; to be surrounded with friends all supporting your art isincredible. No amount of words can express our gratitude for that kind of support.

What makes you stand strong than other Arab metal bands out there?

This is not something that we get to decide. The fans are the ones that make thatdecision. All we do is try to give it our best and time does the rest.