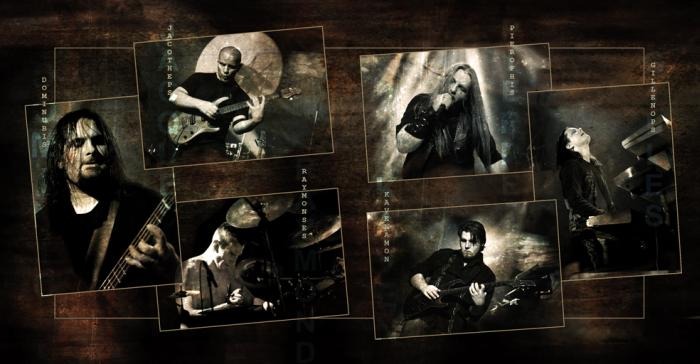 Caught by the fact that they are new to the metal scene, I browsed through the official website of this rising Canadian metal band, the Egyptian designing of the website, the fact that they admire Progressive and Death Metal, that they are influenced by major historic bands such as “Dream Theatre” and “Deep Purple”, and the main concept of their first album.

From where came the idea to call the band “Sequence”?

Well, Sequence came along after a couple of nights sitting around and trying to come up with a name that would identify the band’s ideology and our style of song writing, which is pretty progressive with long epic songs that aren’t your typical radio friendly type of songs. Plus, the idea of doing only concept-oriented albums would define even more the meaning of “Sequence”. Our albums are and will always be built under the rock-opera; story-telling format so “Sequence” summed up pretty much what
We wanted to identify with.

Can you define what brought you together as members to form “Sequence”?

Back in ’96 or ’97, Ray and I used to play together, just before forming “Spelldown”. It was a melodic thrash metal band along with my brother as the singer. Jacques joined Spelldown in the last year of its existence. After 5 years, Spelldown split up and we found ourselves without a band for a couple of months. But soon enough, Ray, Jacques, my brother and me had the urge to form a new formation, with a fresh outlook on music, setting no boundaries whatsoever. In February of 2002, my brother who left the band a couple of months later, found our keyboard player Gilles from an ad on the Internet. We talked about our vision about what a band should be and our ideas for concepts and everything and soon played together and the chemistry was intant. We soon found ourselves writing what would be the first riffs and songs for “Plague Solstice Part 1 and 2.” And Pete our current singer joined us in the summer of 2003, he was a friend of ours since the Spelldown days and heard that the singer’s spot was vacant so he jumped on the occasion and became our front man. Basically the urge of creating something new and fresh for each of us was pretty much what brought us together.

What is the message you’re trying to deliver to your fans?

We’re storytellers basically. We don’t want to tell people what to think nor do, we want to drag our audience and fans along with us on a journey. For this concept we want to take the fans on an epic journey in Ancient Egypt, and we hope that our music will make people dream and just carry them right in the middle of the story.

I can see through the concept of the album “Plague Solstice Part1” that you admire Egypt and the ancient Egyptian history, explain why?

The idea of doing a concept on the 10 plagues of Egypt came up back in 2000 if I remember correctly. It was an idea that Ray, our drummer came up with and we immediately loved it!! We’re all big ancient and world history freaks so the idea of recreating what we think happened back in those days was a real thrill and we instantly stepped up to the challenge.

How did you prepare for the “Plague Solstice Part1” project?

We would meet up about 2 to 3 times a week for about 2-3 years, writing music and lyrics in our rehearsal studio in downtown Montreal. Each of us came up with some riffs or songs that we wrote at our houses and just put it all together. For the lyrics Gilles and me wrote quite a few texts together, as for the drums a remember that Ray did found a couple of beats and laid them down with a beat box and taped it on a software on the computer back and Gilles’ house. But soon enough we had a lot of material to go to the rehearsal studio and finish the songs on the spot the four of us being, Jacques, Gilles, Ray and me.

Dominic: what did you find in progressive and death metal that you couldn’t find in other music genres, which defined “Sequence” music later on?

I listen to all types of metal and music in general, but what I love about death metal is the energy. I mean, you can’t fond in any genre of music the sheer brutality and energy found in death metal. I love technical music as well so that where progressive music steps in. Often prog-metal is technical and as for our music in Sequence the degree of complexity is definitely there. So the both styles just happen to blend so well, really it came very naturally. But I do listen to black metal and good power metal bands as well, but not as much. Jazz and classical music are also a part of my influences.

How did great bands such as “Dream Theatre”, “Deep Purple” and “Iron Maiden” affected your lives as musicians?

I can speak only for myself, but Iron Maiden changed my life when I was a kid. They really redefined the way I looked at metal music. The epic song writing was there, the harmonies, and Steve Harris really impressed me for his bass playing albums such as “Powerslave” or “Somewhere in Time”, he really forged a part of what I am as a bass player I am today. The whole 80’s metal music scene is what made me who I am up till this very day. As for bands in the 70s I guess if bands like “Deep Purple” or “Rush” and “Black Sabbath” haven’t been there who knows what would the metal scene would’ve been like, would’ve it ever existed?? Who really knows? As for “Dream Theatre”, I think that they really are a progressive metal icon and if you’re a fan or a musician in a prog-metal band you can’t go pass them, simple as that.

What are the future plans of the band?

As for the end of the year, we’re planning a record launch party for Autumn and as quick as September we step in the studio once again to put the finishing touches on Plague Solstice Part 2. We should be able to release that one in early March or April 2006. We’re also working on distribution deals and looking for a label to be interested in our music, to expend in every way possible as a band. A lot of work, but also a lot of fun, definitely worth while

A last word to say to the Egyptian metal fans?

First of all, thanks a lot for your interest in our band, pick up the CD and listen to it, I think you’ll find a lot of things on there that you’ll like. We hope that the future will take us to your country; we would love to perform for you guys! Keep metal alive! See you guys in the near future I hope.