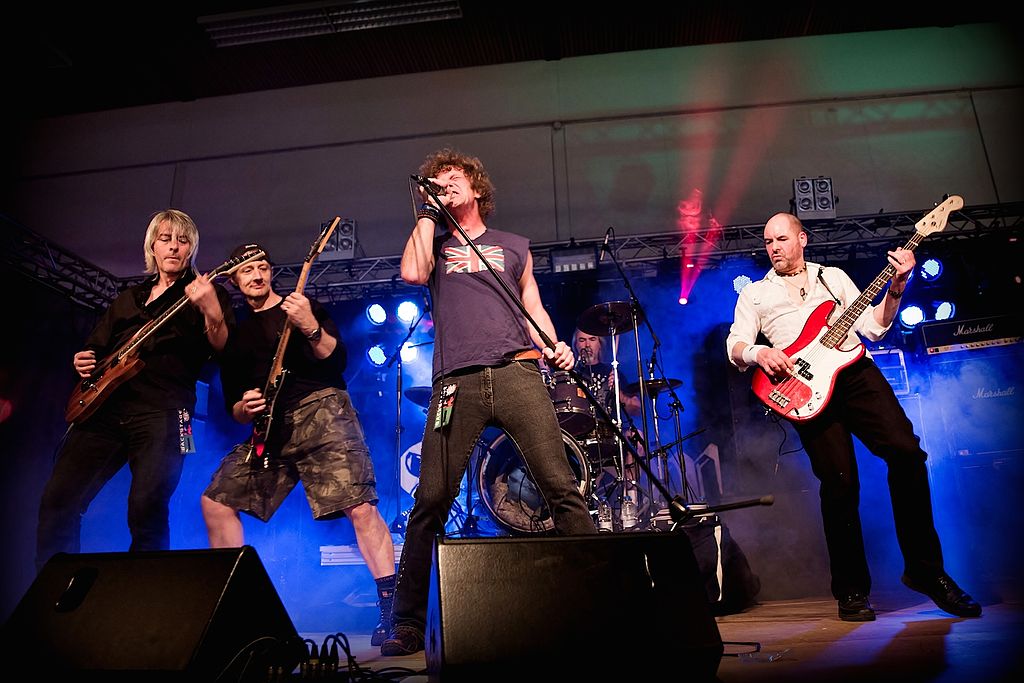 It is really difficult to remember why we split up back then. After some reflection on this, I think that we felt that Salem run its course. From the very start of the band, we had been gigging hard and building our support, writing songs that we liked and that we felt represented our view on rock/metal music, pestering the rock papers and magazines to notice us, spending our hard-earned money on recording demos and getting better gear for the show, nagging record companies to get some sort of deal, and so on …
By 1983 I think that we felt that we’d had enough of banging our heads against the wall – thinking that we were not really getting anywhere when bands like Iron Maiden, Saxon and Def Leppard we becoming hugely successful.
We were only in our late teens/early twenties and were probably very impatient.
That year we recorded our third demo in Huddersfield – inc. ‘The King’, ‘Hangman’s Noose’, ‘Other Side of Hell’, etc. and we were very pleased with the sound and the songs – so when we got no interest from the music industry it was a massive disappointment, and feeling so deflated we decided to call it a day and go our different ways.

At that time – and until 2009 – we never had any thoughts of reforming the band.

How do you all feel playing together after 27 years?

When I was approached in 2009 to release all the Salem recordings from the 1980s, I first had to track down the guys – we hadn’t been together for a long time. It was great to meet up and of course everyone was very happy to release the 1980s music – on what became the In The Beginning … album.
With the release of this album, we thought it would be great to play a gig together and after a series of rehearsals, we played our first gig in 2010. It was great fun and we got a brilliant reception. There is a line in our song ‘Reach To Eternity’ that goes … “Yeah! It is how it was meant to be”, and that was exactly how it felt.

Is the NWOBHM appreciated by metal fans today or do they just expect to hear the classic covers from the 80s and 90s?
Yes. We have been delighted with the reaction to our recent Forgotten Dreams album – some people calling it their album of the year! More about that later.*

Have you been to Dubai before in any capacity? What brings you here?
Yes. I have been to Dubai before. I spent about six months there, on and off, in 2009 and 2010. I found it a fascinating place – a real mixture of cultures – some incredible city planning and architecture, old and new. (I visited the then-newly opened Burj Khalifa). There was a real “can do” attitude. I actually had my guitar with me in Dubai and I composed a song about my some of my experiences – we are recording this for the next album.

What do you have in store for the metal fans at the Music Room?

We will be playing a mixture of 1980s songs, from the In The Beginning … album and new songs from our recent Forgotten Dreams album. Simon is a great singer and front-man and we all work hard to put on a memorable show.

It is always a superb feeling to have loads of people head banging and singing the songs – it’s so good when they already know the words! Those who have not heard us before are soon joining in too.

1 compilation, 2EPs and 1 Full-length album. That’s a lot for three years after a 27-year break? What keeps you going as musicians after all these years?
We just love it. Music is in our bones. And even though we’re a little more “mature” now, we are just as enthusiastic as ever. We love playing and it is a fantastic opportunity to travel and experience different parts of the globe. And there is always the thought that maybe, just maybe, we can get to the next level… and then the next, and then the next…!

*… and our music, with all of the band contributing to the composition of our music, we are always writing new songs that have a range of styles with different dynamics – a healthy, positive sound – we try to make the most of the twin-guitars (of Mark and I) – heavy music with powerful melodies – power and majesty!!!

When is your next album due?
Although we are all proud to be from Hull in Yorkshire (UK), we live in different parts of the country now so getting together to record has to be well planned. However, we have already recorded nearly a half of the new album at Adrian’s studio** so perhaps the album may be ready by summer/autumn 2015?

**Ade is bass player and genius behind our recorded sound – and he is already promising that the next album will sound even better than our Forgotten Dreams.

I can’t help but to ask – there are so many Salems that you now go by Salem (UK). Ever thought of the name change?

Well, yes you are correct – there are many bands and artists called Salem. As far as I know, we were the only “Salem” at the time we started out – however, that was a long time ago so we now use Salem (UK) to try to reduce confusion LOL!

Change our name from Salem? No. It would be like starting again – and we’ve worked enough to get where we are.

Salem is the same line-up as in 1982 – we are old friends – and we have a great respect for each other, as musicians and for each other’s personal and family life.

Unfortunately, Salem’s drummer Paul (Mendham) is not able to join us in Dubai due to other commitments, so we’re very pleased to be joined for this gig by deputy drummer Oli. Please give him a warm welcome.

We are really looking forward to playing for you in The Music Rooms, Dubai – 28 November 2014

Salem will perform at The Music Room on November 28th brought to you by Metal Asylum and supported by the local band, Ascendant. Coincidentally, Ascendant’s guitarist, Ashish Shetty, is also founder and member of the India-based, symphonic metal band Blood & Iron, who are signed up with the same record company as Salem (UK) – Pure Steel Records.