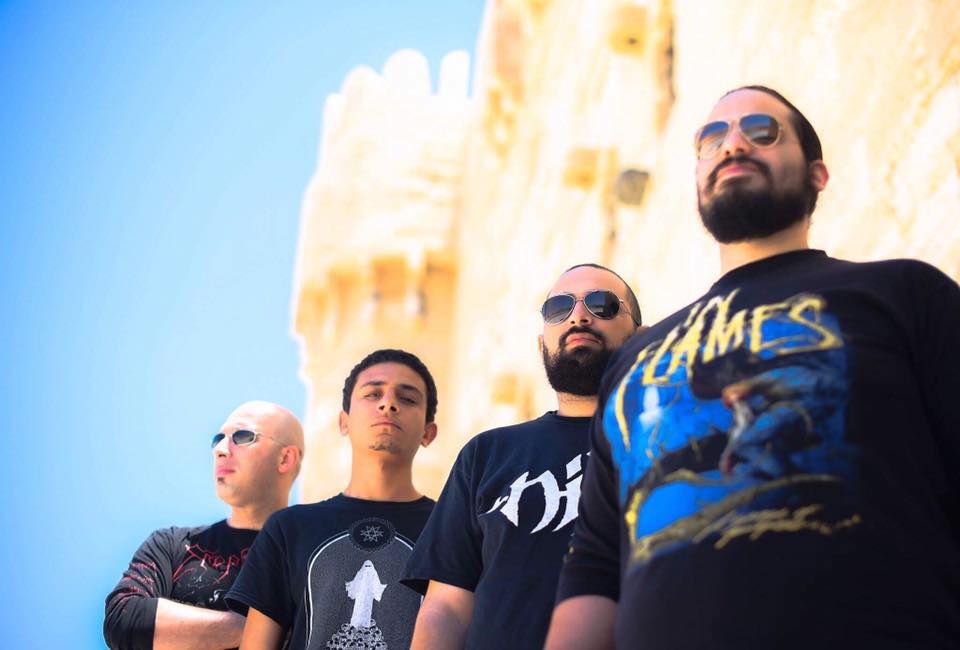 This time around, it’s not a band that you can start building expectations once you read their name, not because they aren’t famous enough but because of their rich history and background. A teaser? Okay… They are derived from the ancient remains of Egyptian black metal band Odious! As a matter of fact, the band’s guitarist Shereif Askar started it all in Alexandria back in 1999. Got your attention, right?

After their participation in W:O:A this year and facing fierce competition, the Blackened-Death metal machines Crescent won it in the end of the day, taking Egypt’s pride to the German lands.

As you already know, ROCK ERA never goes for the normal or commercial, exactly why we are going deep with Egypt’s new Middle Eastern Folk Black/Death Metal band, Nathyr.

How are you guys and how is Alexandria this time of year?
We’re doing pretty well actually, going through the final phase of recording before beginning the mixing and mastering phase of our First Full length album titled ‘As the Legacy Unveils’. Alexandria is getting more and more crowded and we just have to be more patient to get through the summer!

Is it not known to you as Alexandrian artists that your local scene is a bit quite? Or in some cases “invisible”?
Well, we did have quite a cool scene somewhere between 1999 & 2007 but after the Bibliotheca Alexandrina decided to ban METAL because a few idiots crashed 2 gigs, we were left with no venues, but as far as we know the gigs are coming back. There was one held in a hotel called The Mediterranean Azure about 3 months ago. We do have a plan to revive the Alexandria scene once more; hopefully you will get the news!

The vast majority of our readers are not aware of the reasons why the Alexandrian scene does not have its own venues such as Cairo’s Sawy Culture Wheel “Sakia”?
Well, yes we don’t have a “Sakia” but many negotiations have been taking place to revamp a few venues to accommodate more gigs for Alexandra bands as well as fellow Cairo bands.

Nathyr… a core classical Arabic word that means, “Omen”, pretty catchy! Catchy to the point we want to know the story behind it.
When you shuffle through the history and the culture of ancient Arabia, it would tell the tale of a nomad narrator, who used to roam through villages and towns telling fictional stories to children as well as adults; to illuminate the minds of the hordes. The tale itself could be the omen “Al-Nathyr” of a certain evil or eventual ill end that the narrator foresees. In our case we are philosophically telling tales from Middle-Eastern and Arab cultures about conflicts and struggles. Told in the form of a fictional tales, epic wars, and theatrical scenes that takes place in an Arab/Middle-Eastern world.

From Odious to Nathyr… You weren’t shy about going public with the brutal feud between Shereif Askar and Odious back in the days. Did you feel the necessity to get this piece of information out? And through Nathyr‘s official page nonetheless?
The need to reveal this information was because Sherief founded that band; also because he wanted to give birth to Nathyr back in the day, but it seemed that when he shared his ideas and music with the unworthy members from that band they seem to have misinterpreted his vision. It was when Sherief could not take anymore idiocracy or greed from the other members regarding his vision to change the face of the music. The music was hacked and the band name and lyrics were forced onto Sherief WITHOUT his approval against his initial vision of how the music should sound like. After the clash Sherief decided to sit back and watch what they were capable of. And I guess it’s pretty obvious that a band that could only write 5 new songs since 2006 was a hack not a band! The truth had to reach the Egyptian metal scene regardless of how people were going to perceive it. We are more than proud we are sharing this experience now and we wish all the Egyptian bands the best of luck. One little remark, don’t rip each other off! What goes around comes around.

Walking in your fans shoes, how do your fans see you? I mean, through their interaction with the band in daily life.
Well, we have only gigged twice since we launched Nathyr. We don’t really have a clear understating of how our fans view us, but we can tell you that the Arabic lyrics were a massive hit amongst many listeners and the keyboard approaches also.

Arabic is something to catch listener’s ears in most of your productions, how did you reach the artistic and musical mix needed to do so?
Khaled ElShazly is one hell of a talented vocalist/lyricist. His passion to the music and his imagination has levitated Nathyr to another level. We can only be thankful for having him onboard our vessel. Another explanation would be that in Nathyr we aspire mainly NOT to stereotype other bands as we struggle to add to Metal rather than imitate or mimic other bands especially the ones in our same subgenre such as Orphaned Land, Melachech, and Myrath.

W:O:A … previously, we media-covered this event exclusively and were in touch with all the fan’s reactions towards you and the other bands. Can you take us through your journey with the W:O:A battle?
Well, we can only say the journey wasn’t easy from the time we submitted our material, to the preparation phase, to the continuous rehearsals, to the actual day of the battle. Yes, there were a few issues with the concert just like any other gig held anywhere. But honestly, speaking if it wasn’t for Monika Bremer none of this would of happened. We thank her still and we hope this event to take place again, not so we can re enter but to give a chance to new comers in the scene as well as older bands to try and work hard to reach higher levels of satisfaction both for the band member s and also the metal heads!

“The lords of Wargasm” followed “A Diabolical Cane” make us think how the full length album will look like, any hints?
Well, I will try and be as accurate as I can but here goes: Dark, brutal, belly wobbling, head busting, and nerve wrecking. Five words ‘something you’ve never heard before!’

Thank you so much guys for being very cooperative and helpful.