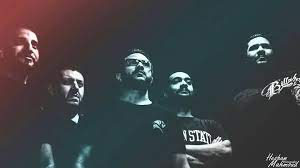 Azraq Samawy, many people in the music scene are wondering about the reason of choosing this name, can you tell us about the story behind it?

Well, the blue color is one of the most beloved colors to most of people, and it’s also a color that relates to fancy and psychedelic background which we are trying to implement in our music and lyrics. We’re not talking about realistic issues in most of our songs, but our songs draw spiritual and fancy pictures so I guess this color reflects that.

Why did you choose to play Progressive Arabic Rock although that most of the rock bands always compose their songs in English?

Progressive!! It is an honor to be described as a progressive band but I guess progressive music means that we are playing music which has never been played before, I mean like King Crimson for instance… the presented music that was not available in their time, I guess we play rock, just rock with a psychedelic Pink Floyd-ish influence and other oriental and groovy influences, as for the language, I guess the core and target of playing music is to have fun, and doing this requires communication between the band and the listeners, for best communication and a wider base of listeners we should be speaking our native and mother tongue, the challenge is to present music that will be in harmony with this lyrics, and I guess we fulfilled this. As I have listened to many bands who presented Arabic Lyrics on rock music and it was Just (Konafa Ma7shia Torshy) to me, which left a background for listeners that Arabic and rock cannot be combined or harmonized… Well it could, and I guess we presented this in a good way.

Actually some musicians say that Azraq Samawy play “Contemporary Egyptian songs” not really Progressive Arabic Rock music, how would you response to that?

WHO, WHAT, WHEN AND WHY?! I mean if we analyze Rock we will find (Rock Beats, scales, attitude, sounds, lyrics, etc…I guess we have enough heavy beats and rock guitar riffs, organ, influenced enough to generate Rock Music , there is nothing wrong with (Contemporary Egyptian Music) But logically we are not doing this, and the biggest proof is this interview from “ROCK” Era Magazine, and we also won the Andromida “ROCK” Festival, so we most certainly do Play Rock Music!

Azraq Samawy plays only their originals, how many albums do you have and what’s your lyrical theme?

well unfortunately we are all not professional musicians, we all work in different places and professions so we do not have the enough time to make a lot of music, we have about 14 Tracks which is about an Album (not recorded yet), but we are trying to have more, about our lyrical path as I have mentioned before we are trying to build up psychedelic theme, use less overused ideas and phrases.

Azraq Samawy have got some reviews saying that your music and lyrics are kinda depressing and disappointing though your music is very great, how would you comment to that?

I would say that we are all living unpleasant realities that influences your best way to communicate with people, which is Music (to me), it is Facts, let me give you an example we have a track called (Salah El-Deen), it is a fact that people manners and attitudes do not deserve a Salah El-Deen (as a sample of good governmental Authority) and that we have to be better to deserve what is better, we have to change ourselves to deserve a new Salah El-Deen, and this is reality, not disappointing or depressive, it is a simple actual fact, that is mentioned in the Holy Quran.

Andromida’s 1st Rock Festival, you have won the 1st place, how did you feel about that?

Felt great, felt Like we are the best, felt like achieving something you like, felt like team work, but I believe that there are some other competitors that if have shared in the competition we would not have gone this far.

Did you really use the prize’s money to start establishing your own studio as everyone said?

Yes and we are still in debt, the prize covered 50% of the cost but it really supported us, I mean without it we would never thought about the studio.

As you play Progressive Arabic Rock have you tried to find a label or a producer, especially that your music can reach everyone easily in Egypt and the Arab world?

I will start this by blaming all music audience, consumers, listeners; I mean no independent underground band regardless to the genre it presents made it to success regarding selling records.

It is a vicious circle, that we are in, no buyer no money no producer, and the only blamed is the audience (as they always attack the wide spread music industries of these days), I think our culture supports to buy a pop star Album rather than trying a new material, our culture supports buying a pack of cigarettes than trying a new band’s release, But we will have a self funded production released by the end of 2010, whenever our financial situation Allows.

As a very successful band that includes very experienced musicians, what advice would you give to the young new bands out there?

Play Music for fun, but do your best to get the best of it, play as tight as you can.

Thanks for your time reading this, hope that we present music that achieve the goal of having your attention and admiration.