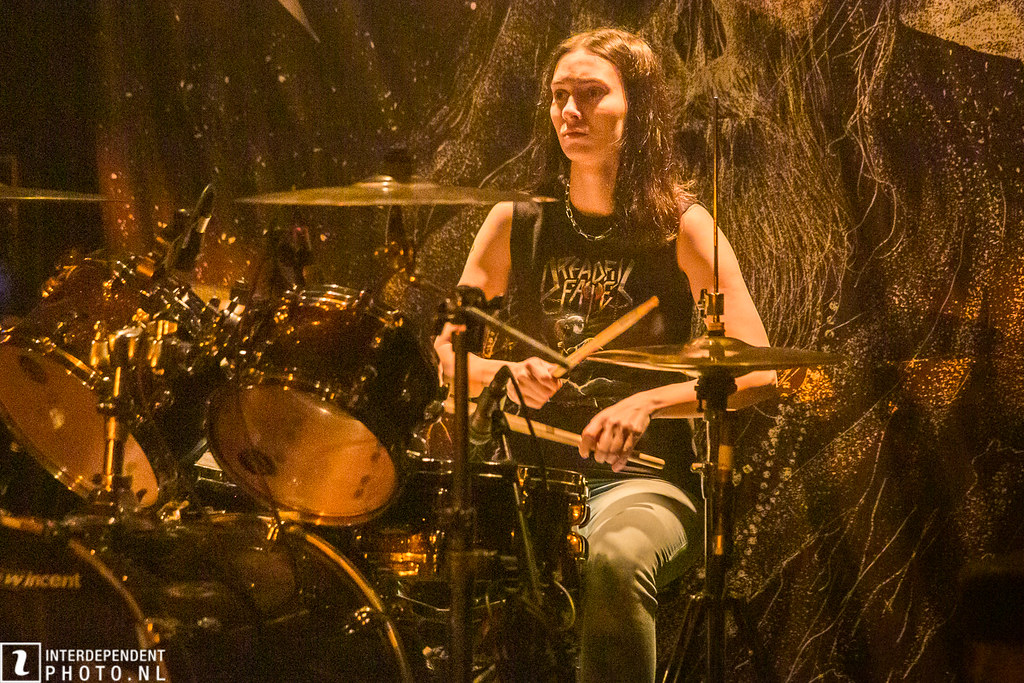 Nervosa is one of the leading all Female Metal bands universally. They attracted thousands around the world through their dynamic thrash music and catchy performance. The band is gaining huge successes around the world, in addition, the band performed at the Wacken Metal Festival in 2019. 2020, the Latin forces will hit Dubai for the first time! In cooperation with Metal East Records, we had a nice chat with Nervosa‘s Drummer Luana Dametto before the band’s performance in Dubai.

R: I am really excited about having this interview with you, girls, thank you for giving me this chance! So, Having a performance in Dubai as a part of your Asia tour, How do you see the Metal scene in Asia?

LM: We don’t have the full experience of how the Metal scene in Asia works, cause we haven’t been there before, but from the interaction we have online with fans, we can say that the scene is very passionate and very similar to the Brazilian one.

People are always making their own band material, from their favorite albums and artists, they support a lot, send us some of the things they have done. It is passionate like Metal should always be.

R: As we are talking about your performance in Dubai, Is it one of your dreams to perform in the Middle East? Do you have a general background about the Metal activity in the region?

LM: Of course, I think one of the common dreams between bands is performing as much possible, everywhere. It is our first time here, so we are very excited to know more, and meet the fans.
About the Metal activity in the region is not only Dubai but also the whole of Asia, I think one of the coolest bands in Asia is Wormrot. It is a very good Grindcore band. I guess we are going to get more into the activity in Dubai; people usually give us CDs and recommend us stuff, it will be good.

R: How can you describe the Metal scene in Brazil?

LM: Just as I described the one in Asia, very passionate. We don’t have a lot of money in Brazil, so it’s hard to afford to go to gigs or buy official merch, but people are always saving all they can, painting their own t-shirts, putting Metal in the first place, even though things are hard in the country right now. For you to keep this love to Metal in Brazil, even though we are living hard times. You need to be very passionate and have Metal as your main preference in life; otherwise, things tend to fade away with time.

R: It is somehow expected to face some hardships as an all Female Metal band, what are the hardships you face and how can you advise female Metal musicians to overcome any hinders?

LM: Metal is still mainly commanded by men, so in a way, we find a lot of sexism here and there. One thing that makes me very disappointed is when people treat you as if you know less about your instrument than any other guy around because you are a woman.

Things like explaining basic things about my own gear. We are all musicians for a long time, so we know how to handle our gear. Something else is when people try to put their hands in the wrong places while taking pictures. We are not objects and we are there to work, so if you try it, you are not going to get your picture, it is just a matter of respect to the artists you are there to see.

These and many more are happening here and there, but we got used to it so we learned how to handle the situations. I advise female Metal musicians is that focus on your work after all, and if someone bothers you, just get away and ignore these few people, you don’t need to do anything that makes you uncomfortable or accept any advice from people you don’t know.

R: Based on my experience of interviewing more than 100 female Metal voices, they are always talking about certain responsibilities whither for their work, studying and the society itself, how can you manage your time between family and music?

LM: I do not see any problem in managing my family and music, and I guess, it is the same for the girls. The ones we love know that we are away for work reasons. I don’t see my family that much, but it’s not a disaster, cause at the end of every tour we come back home to see them again, just knowing that they understand what we do and that we need to be away to work.

This is enough to make any personal relationship that we have work. About studying, I stopped university to be playing in Nervosa, we all stopped our studies for these reasons, I guess it’s necessary to do it when you spend the whole year touring, but we can still educate ourselves during the tour, this is usually what we do with our study interests.

R: Forming a Thrash Metal band is somehow known that most of the female Metal musicians go to Symphonic or Gothic music, but performing Thrash is somehow powerful and rebellious sometimes, why did you choose Thrash Metal and what are your main influences?

LM: I cannot say much why Nervosa started playing Thrash Metal, because I got in the band later on in their history, but at least in my case, I always liked heavier Metal, like Death, Black, and Thrash, so it was not unnatural to start playing it with them. I guess it is just our personal preference, I do not even know why I identify more with Death Metal, but I do.

R: In your point of view, where are female Metal musicians standing in the universal Metal industry?

Standing at the same place, like any other bands that are not just composed by female musicians. We have many big female musicians and metal bands, it is still in a smaller number, but it is not a surprise anymore. There is a place for everyone equally.

R: What are your favorite female Metal musicians?

LM: Justine Éthier, Simone Som Pruijmers, and Reba Meyers. They are absolutely the best for me.

R: Finally, what would you like to say to your fans that are waiting for you in Dubai?

LM: That we going to play as hard as we can, and that we cannot wait for meeting all of you in person. I hope to see you all there!

Special thanks to Moutasem Kabbani, the founder of Metal East Records