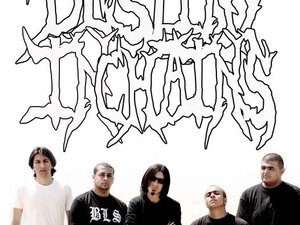 Once upon a concert, fellow musicians took to calling Destiny in Chains the “Pioneers of Metalcore in Egypt”, since then they have been dominating this genre of Metal until their sudden disappearance from the scene’s radar. Rock Era decided to track down Destiny in Chains after their comeback at the Metal Blast Third Anniversary which we have previously featured; a huge sudden comeback!

Why were they absent? Why was the long hiatus for? And many more questions were the topic of this insider look into these Egyptian metal stalwarts – Destiny in Chains.

Most of the bands start with a certain name and genre then change it afterwards due to unknown reasons or circumstances, did that happen to you or was it all set from day one?
Since day one the band has been a metalcore/hardcore band. After a couple of years we decided to include some melodies and a sort of post hardcore influence. But honestly, it didn’t work for us so we did some Deathcore singles. We decided to land on the Deathcore Island and we did it big time. It was obvious from our last concert. We never left the core part out of our music and now we are pure deathcore.

Why Deathcore?
The words we would use to describe ‘why’ would be because it is young, passionate, aggressive, harsh, and straight to the point and all about inner struggles.

Your disappearance triggered a huge hustle between fans who also tried to track down your news but failed. Why did you disappear?
Changing genre requires sometime for new composing. We didn’t want to come back after almost two years with the same track list. We wanted to impress our fans and gain new ones.

One of the last pieces of news we received about Destiny in Chains was a while ago and that was that the band is on a new record label, which supposedly means a new album after your latest ‘Last Forever’. Unfortunately nothing arose from this and no official explanation was released. Can you clear the fog around this?
First of all it was a digital label, not a physical one. This did not give us as much as we wanted and it did not help us with the Last Forever album. It was for the Deathcore stuff that we’re working on and recording. After that we got lost and we didn’t deliver the album on time, so we lost it all. So basically we had this label and then we lost it. This is what every start up band could dream of but hope doesn’t exist in our book, only human will. So we decided to get back to the work.

Congrats on the new bassist. What happened with Moose, the former bassist and how did Squirtle join the band?
Moose had a lot of work, and we appreciated this. We do not really have anything else to say about Moose. If you need more information you can contact him directly. Mostafa Khaled A.K.A Squirtle has been a part of the family long time ago. He did more than we have expected in overall.

Legend says the track called ‘Sayed Ragai’ was written ten minutes before hopping onstage. How could a whole track be written in just ten minutes?
Exactly the same way you write a review while you are standing in the concert – it is your job. This is my job. Actually, the whole track took more like one minute to structure with the never played riff. Writing the lyrics with the music ten minutes before the show is pretty fine for us and ‘Sayed Ragai’ is not that hard to play. We are 100% sure most of the bands did the same thing.

Let’s go deeper – what is every member’s source of inspiration musically and on a human side?
Let’s explain this with the bands that inspire us.

Zander is influenced by Whitechapel’s Bozeman, and Suicide Silence’s Mitch Lucker – God bless his soul. Some Black metal bands, and some Melodic bands like old Amon Amarth, Children of Bodom and some Atmospheric bands such as Septic Flesh.
Men3m; for sure, would go for Opeth because of Mikael Akerfeldt.
Sheva’s influences range between Zakk Wylde, Tuomas, Juha Raivio, James Butler, and Dimebag Darrell. Bands like Cannibal Corpse, Decapitated, Bloodbath, and Beneath the Massacre really influence him as well. When it comes to technical shit and brutal stuff that is where a lot of inspiration comes from, even some post rock for sure.
Squirtle loves a lot of deathcore/metalcore bassists. All That Remains, As I Lay Dying, Suffokate, All Shall Perish, Killswitch Engage, Whitechapel, and As Blood Runs Black are the main influences. He knows how a Deathcore/Metalcore bassist should look like.
Lolo, the breakdown guy, will go for Whitechapel, Emmure, Architects, and a lot of hardcore and Deathcore bands.

Transitioning from pure Metalcore to vicious Deathcore is a ballsy move to take, how did that process go inside the band?
Believe it or not it was done in the blink of an eye. “Hey guys what about Deathcore? We already made like three or four tracks in the very beginning so why not keep it like this” and it has been like that ever since.

About 90% of music makers pour their heart and struggle into their music. If we get a closer look at your music and lyrics, can we see the struggles you have faced?
Every track explains a situation for each member of the band. It is the type of art and music that calls for independence. It means that each one can get by on his own with a complete different perspective from the person standing next to him. That is exactly how it goes for the band members

What is it like being a band and real-life friends?
Simply the chemistry of a band comes from a lot of stuff that we usually call it “being friends”, and for sure if there any problems in the band it does not affect the friendship that we have.

How are your side projects going?
Well, you’d called them side projects so they’re not affecting anything. Most of them are working fine though.

Zander, Sheva, Lolo, Mon3esh, and Squirtle – what are the stories behind all those nicknames?

– Mon3esh for Men3m. That is pretty simple 😀
– “Squirtle” was called this because when he was younger he looked like the Pokemon character Squirtle.
– “Zander” was called this name a long time ago by his friends.
– “Sheva” was called this name back in High School for the football player Shevchenko.
– “Lolo” because he such a big guy and calling him it makes him seem a little smaller.

Future plans? What does the near future have for Destiny in Chains fans?
Working on a lot of new stuff and a lot of changes in the band. Everyone should stay tuned. Thanks for the support; it is all more than we could ever dream of! Also, all those who do not like our music should try the new stuff and tell us your feedback. It will be appreciated!