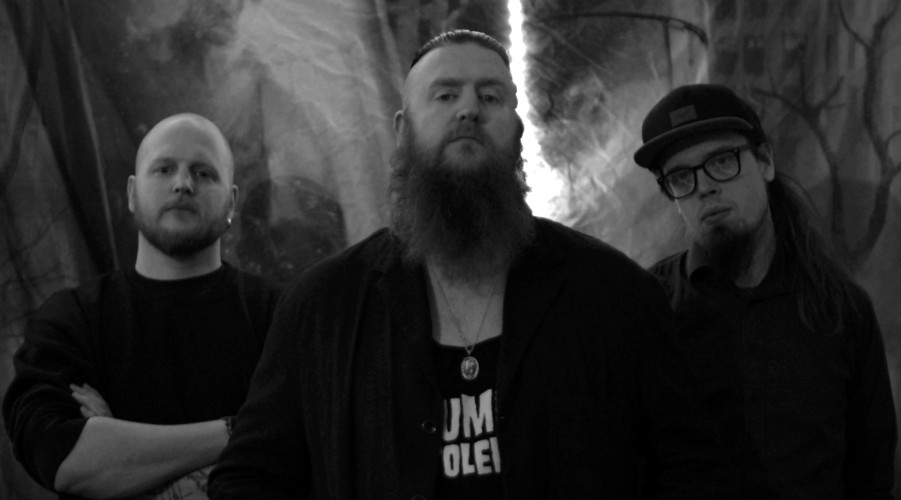 • First, I salute you for such an amazing album, well done indeed! Each one of you has a big influence on the Swedish music scene. When did you guys decide to start a new project?

Thank you! It was Kenny who had the idea to start with. I had produced a couple of records with his previous band, and we often bonded about doom metal when we met. So he called me in the summer of 2019 and asked me if I would be down to start a doom project with him, and I was! All of us in the band had previous projects which now tended to be put on ice, so the timing was perfect.

• The variety of styles you have, helped Cavern Deep to present a special heavy doom flavor. Was it planned when you guys started the songwriting process?

Yes and no. I think we wanted to make something that was a bit unique, but I think the fact that we all come from a background of not playing doom at all helped to create a bit of a unique flavor. With that said, we are actively trying to get the sound of Swedish progressive to mix with doom in our own way.

• Your debut full-length and starting with a concept album which is not common these days, weren’t you afraid that may affect the band’s publicity?

No not really at all. We were not thinking in any such terms. We love concept albums and wanted to make one that was as immersive as possible, and we will continue doing so for at least a couple of albums. With that said, I personally think that most of the songs stand good on their own as well. You don’t have to know the story to appreciate them.

• “50 adventurers that finds the entrance to a lost underground civilization which they enter with the hopes of treasure.” interesting topic indeed. Can you tell your fans more about it?

Yes, the concept of the album evolves around an archeologist and his brave men who enters a portal down into a lost cavern devilling civilization. Each song entails a story about a section of the cavern, going deeper and deeper for each song. The story grows darker and darker, and not to spoil the story or anything. But it doesn’t end well.

• Although there’s a great activity on your YouTube channel, I noticed still you don’t have any music videos, are you planning to release one soon?

We like creating content there, it’s fun. And it is true that we don’t have any traditional music video, but we are releasing a video series currently which includes custom art and text to embellish the story of the concept. As of now we’ve released 5 or 6 of them and have 2 more to go. When all is said and done the plan is to release them all as one big video were all the songs are as one long song rather than 8 individual ones. All the art and the videos themselves are done DIY.

• Nowadays, most metal and rock bands prefer to have short length tracks, still, half of the tracks of the album are hitting 6 and 7 minutes. Aren’t you afraid that young age listeners may avoid it?

Not at all, I think young listeners listen to a lot of long tracks if they’re good enough. As a matter of fact, the song that’s most popular with younger people in our discography is our song “Fungal Realm”, and that’s the longest song on the record. A prediction on my end is that we’re probably going to keep making long song, perhaps we’ll make longer songs. We like making long songs.

• If I am right, the sound design took a good part of the album mix, in your opinion, how sound effects did help the album’s final touches?

That is very true. We are very particular about our sound in general, and this might be my biased opinion as a music producer myself, but I think that the end production is very important. I subscribe heavily to the idea that the most important thing is that the production and effects are artistically interesting and creative such that they fit the narrative of the song. For me it isn’t about making the most high-fidelity recording, but rather making the recording that fits the song.

• Tell me, Max, I believe that you’re highly influenced by bands like the iconic Candlemass in your vocal style. Am I right? Tell me more about your album vocal preparation.

We all sing in the band. Kenny is the one that does the high-pitched operatic vocals, and I am the one making the low and dark vocals whilst Dennis does most of the harmonies. But we are for sure both highly influenced by the traditional doom scene. Candlemass has for sure been one of the bands we’ve listened to the most. In our music we try to walk the line between the stoner/sludge scene and the traditional doom scene.

• Finally, thank you for the chat and tell your fans more about your 2021 plans.

My pleasure! As mentioned previously we are releasing our video series, it will conclude the 1st of October. The rest of the year will be spent playing a couple of shows together with our pals in Domkraft, 10,000 years, Malsten and Maha Sohona, as well as concluding the work on our next record. Everything has already been recorded for it, but we have a lot of work left as we mix and create the artwork and story ourselves. We’ll hopefully have some news about that soon.