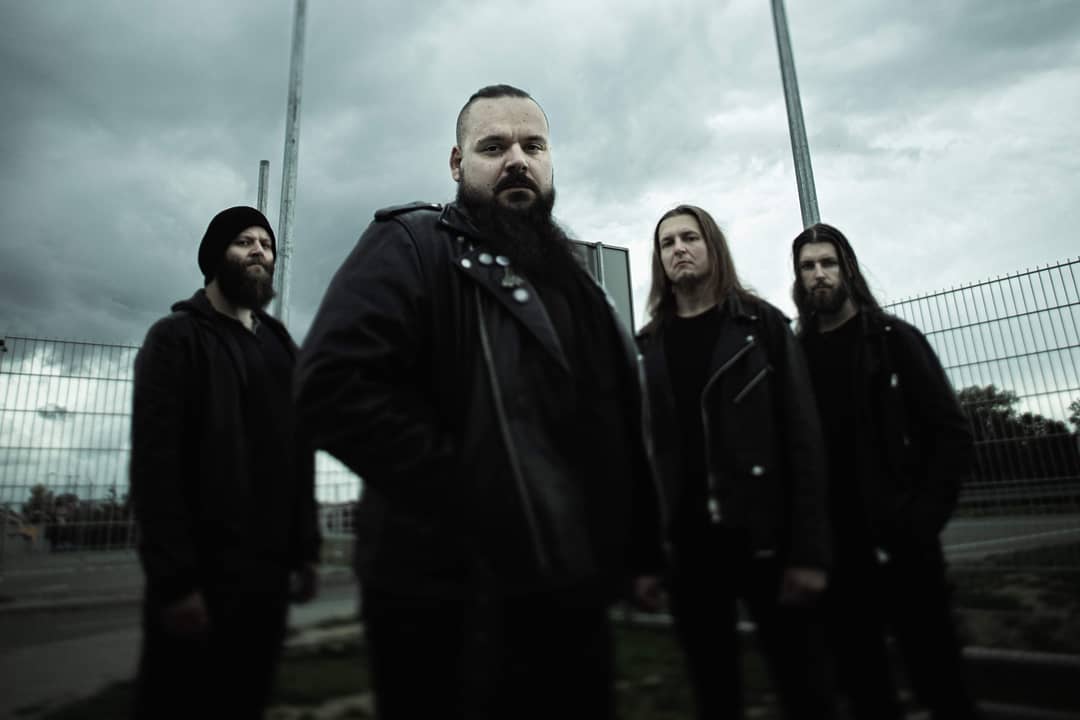 So, tell us how you guys formed?

HUB: My friend and I formed the band in high school in July 2005 in Rzeszów, Poland. We found the rest of the line-up and started to play first gigs after one month. It was pretty fast!

We knew there was a change in the line-up, why was that?
HUB: Yes, there were several line-up changes during those 9 years. Actually I am the only original member left. You know, people have different priorities, like college, relocating to other towns, getting bored, not being good enough, having better things to do instead of playing, getting fired from the band, quitting the band, or not being able to go on tours. Being in a band is a major responsibility. And when you have to play, you must have people that are ready to play/jump in as a substitute. Recently, this is what often happens in Banisher.

JACEK: I joined Banisher officially at the beginning of 2014 as a full member, but earlier I had played few gigs as a session drummer. My first gig was at ‘Cieszanów Rock Festival’. We later played one tour across Poland together, and one gig in Czech Republic.
Tell us about your first Demo in 2005. The lyrical theme, the recording process… etc.
HUB: It was a pretty cool experience. We were like 18 years old, feisty of playing and very excited about the recording. To be honest, I think that Sorrow of Death is my favorite album from our past recordings. The lyrics were about death, sorrow, and suffering. Whatever though, it was all that depressive bullcrap that I never really cared about, hehe.
Slaughterhouse was the first full-length album; tell us about the recording and publicity process in Poland.

HUB: I really hate what happened with that album. It was written in 2006, recorded for the first time in the same year, but it was not satisfying enough for us. Actually, only two songs were good enough to see the daylight, which has been later released as our EP Human Sacrifice. I was insanely angry about that situation, so we wanted to record it again. We did two songs again in 2008, and the rest at the beginning of 2009. The whole album was ready in June 2009. We have immediately started to look for a record label, and we got in touch with the phony rip-offs, HeadXplode Records from Russia. They planned to release it in March 2010, and promised us everything: European/Asian tours, interviews, promotion, and CDs. It was about everything that we would have wished for at the time. So we agreed to sign with them, and prepared a tour in Poland in May. The release date was delayed till April, then May. We were doing a tour without the CD. From June to July, and in October/November they said that our CDs are being held at some border office and buying them off is too expensive. So the solution was to only do the online shop. I told them to fuck off and terminated the contract. In December we released the entire album to download for free.

How did it feel producing your first full-length album?
HUB: I think it is one pretty amazing experience. Though right now after few years, when I remind myself that it took like 4/5 years to record and release it, I literally want to puke and kill someone with my bare hands, hehe.

What does the metal scene in Poland look like?
HUB: Well, for me if you are considering the bands that we have, I think it is like one of the TOP 5 metal scenes ever (I highly consider extreme metal/death metal etc). We have (or had) so many great bands that many countries would do anything to have as powerful scene as we do. However, if you contemplate the relations between some bands, envy and malignancy is what I really hate about our scene. Like Divided metal fans – death metallers do not attend black metal, thrashers do not go to death metal, death core fans do not attend old school metal, and so on… That is sad, because people should support the groups and not just be fussy and linger.
TYTUS: I would not say it is negative and unapproachable, once you know what you are doing you are fine. It is a bit annoying that once you do something “wrong” according to the elites, you pretty much have to start from the beginning. It is not very forgiving, but there are lots of awesome. Pretty interesting bands here. I run a record label, so I have to be aware of what is happening at the moment, that also means no free time 😉

You recently played a concert in Egypt, how was it?
HUB: It was the best gig in my life, never saw such an amazing and thirsty metal crowd!
JACEK: For me it was the second time actually. Probably some of you may remember Depopulate last year. But nevertheless, it was even more exciting for me to play once again in Egypt.

Any upcoming tours and/or albums?
HUB: April and May were pretty busy for us. We played Inferno Metal Festival in Norway, mini tour in Poland, and our first European Tour visiting Holland, Belgium, France, Germany and Czech Republic. In June, we are heading on one fest in Germany, and we want to finish and record our third album by the end of the year.

What are the main influences on your music style?
HUB: Every single thing that I ever listened to.
TYTUS: Combination of my current state of mind and fascinations with my long-lasting passions, worldview and dreams.

Did you communicate with other Egyptian bands during or out of the concert? How was the experience?
HUB: Yes, we’ve met a lot of bands in Egypt, and had nice chit-chats with the members.
JACEK: I personally had and still have very good contact since last year with the drummer from Crescent – Amr Fakhr. I would like to greet him at this point.
Tytus: I would especially like to say hi to Zander from Destiny In Chains, and Sayed from Sinprophecy – fantastic people and great bands!

Are you planning to come again soon?
HUB: If there will be such a possibility, we would love to come!
JACEK: I would love to visit Egypt as many times as possible.
Tytus: Always and anytime!

Any exclusive news you would like to share with us?
Right now we will have some time off from gigs, more like concentrating on the new album and recording it as fast as we can.

Interviewed by: Ahmed A. Atteya and NJ Bakr
Edited by: Duha Mousa