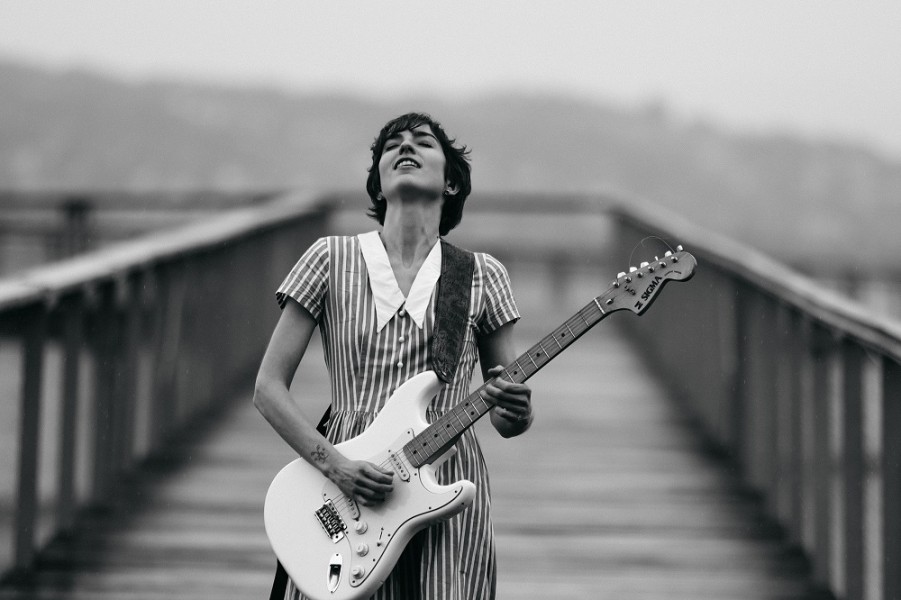 How do you feel about your upcoming gig supporting Agnes Nunes at the Jazz Café?

Very excited about performing at a dream venue (where so many huge artists have performed) and supporting such a talented artist – also a bit nervous!

How does your Brazilian heritage influence your music?

That is an ongoing process – when I started Anchor the Sun for some reason I thought I had to hide my Brazilian roots, and now I see that it’s by embracing them that the music becomes very unique and truthful. Also, I can’t really hide it because I grew up immersed in Brazilian culture and arts, and now that I see all the beautiful things I can do with it, it’s becoming more evident. In ‘Going Through The Motions’, some of the vocal harmonies can be compared to some early “Os Mutantes” stuff, and some “Secos & Molhados” too. In “Say It”, the harmonic progression has its Brazilian flavour – the use of diminished and suspended chords within this context is an example of that.

From David Gilmour to The Beatles, how do your guitar influences shape your music?

Well, The Beatles influence me mainly in terms of harmony (and sometimes arrangement too) – the use of vocal harmonies and the harmonic paths I choose to take I can say have been greatly influenced by The Beatles. My guitar playing is mainly influenced by David Gilmour. I’ve always listened to a lot of Pink Floyd and a lot of Gilmour’s solo stuff too. I am amazed by his versatility – from Prog Rock to Opera and lullabies, Gilmour manages to put his stamp with class in everything he does (unsurprisingly). I look up to him in many ways, but what I think is more obvious to music lovers is the solo playing, with multiple tones bends and laid-back-but-still-jaw-dropping ideas. I’ve aimed to bring a taste of my own musical voice, as well as experimenting with things I’ve seen in his solos.

You have an impressive vocal range that could carry the weight of the most difficult songs; how did you use that to explore different harmonic maps?

Wow, thank you for the compliment! In ‘Going Through The Motions’, I used vocal harmonies to bring texture and grow the arrangement throughout the song. At first, the backing vocals come in slightly more subtly and later they get punchier, with the use of belting. The untraditional harmonic map is explored through instrumentation, given that the key of the song changes throughout.

What inspired “Going Through The Motions”?

I’d say it was a moment when I was feeling sad and defeated and this song was a way of coping with it.

The music video for “Going Through The Motions” was one of the best we’ve seen in a long time. How did it come to life? How does it play into the main theme of the song?

That is another great compliment, thank you so much! The video was created and shot by the Austria based Brazilian filmmaker Eduardo Mandim. We met in Zurich to shoot over two days. The idea of the video speaks to the meaning of the song – the character in the video is lost in time, endlessly travelling with no destination.

How has COVID impacted your artistic journey?

Oh man, it hurts to even talk about this. I’m not sure where I’d be now if it wasn’t for COVID… I guess I’ll never know. I’m trying to focus on the positives that happened because of the pandemic – I’ve learnt to be more structured; I’ve been more productive (in some ways), I have amazing people supporting AtS.

What are your upcoming projects?

There are some releases lined up for 2022 and a UK Tour for the second half of the year!