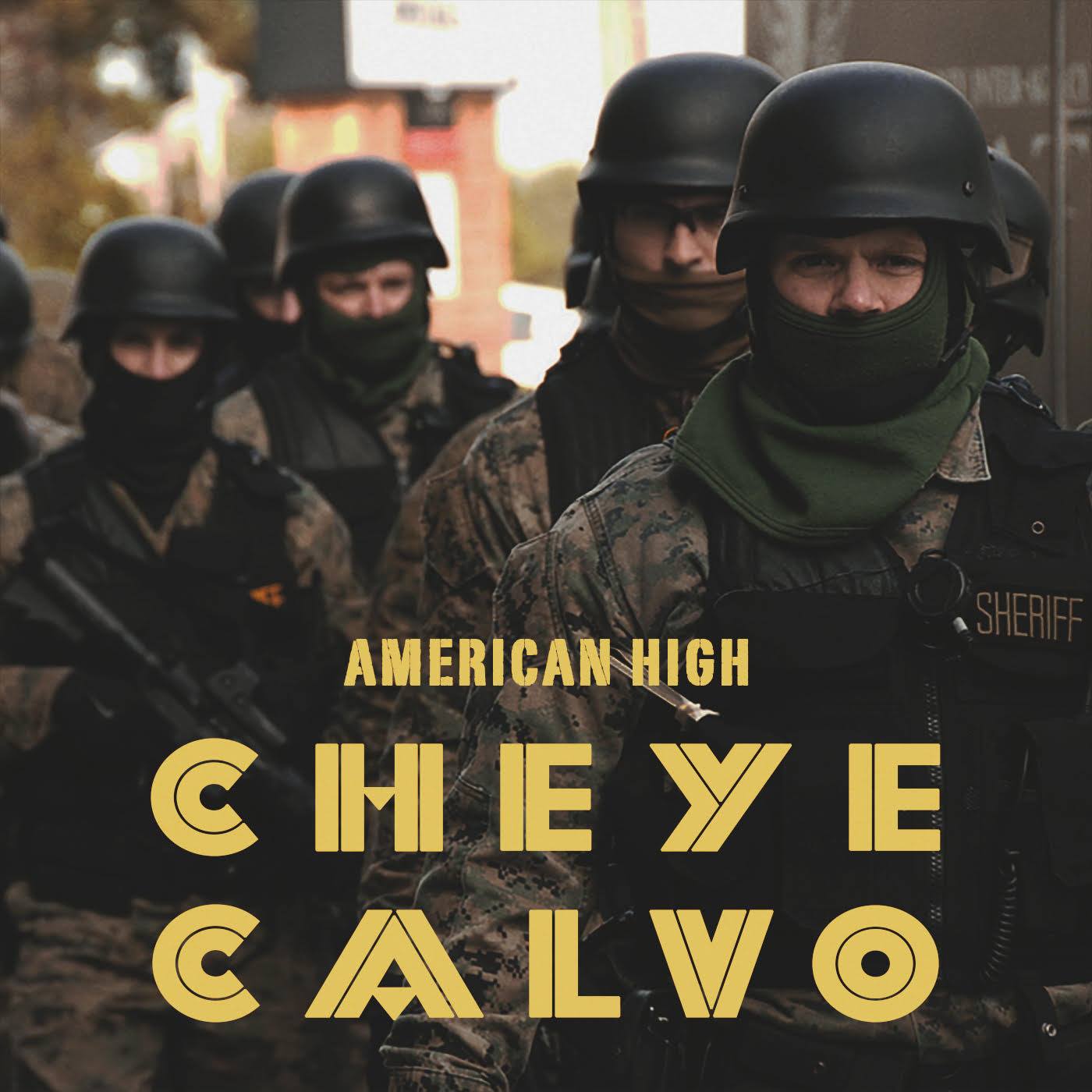 American High grabbed my attention by their political themes. Their powerful single “Cheye Calvo” made me curious to know more about them. Let’s find out!

First of all, we would like to say thank you for this opportunity. The band began with me writing and playing songs. My name is Doug Terry, I play rhythm guitar and sing in American High. In the beginning, I played with lots of different musicians and friends, one of them I’ve known for years. We went to American High Schoolin Fremont, California together. I had a lot of reasons for starting the band, but finding a cool band name was not one. When the four of us met, things started to happen pretty quickly and we realized we needed some kind of name. American High stuck. I wish I had a profound answer, but basically,it’s the name of my high school.

Well, we think of American High music more as having strong moral and ethical influences, rather than strictly political ones. But you’re right, when people discuss morality (or lack thereof), politics obscures the conversation.

To answer your question, yes, the new single will be released in days, and it does address an issue of critical moral, ethical, even geo-political importance. To us and to millions of other people as well.

The short answer is no, we’re not at all afraid.

We agree with you that there aren’t many political issues where 90% of people agree. Not even within the same family, let alone country or world. But since‘political’ American High songs are really just about right vs wrong (rather than right vs left) we are convinced that the vast majority of people WOULD unify and agree. If only the issue is presented in a clear way.

For example: we, American High, haven’t been to most of the nations around the world.But, I’m willing to bet that things like religion, politics, ethnicity, social status and nationality won’t matter to the vast majority of folks if, say, they happen upon a scene where a 2-year-old child is playing near a pond. All alone, no one else in sight, and suddenly she falls into the water. You know in your heart that kid is way too young to swim and she’s going to drown very soon.
We believe the vast majority of people alive today, if physically able, would jump in and rescue that baby.So, why would we all agree?That the right thing to do is jump in and save the drowning baby? Like you just said, human being can’t agree on almost anything.

American high thinks most know the morally right thing to do because it’s just one of those things we’re all born knowing. It’s human nature. No one has to teach us right from wrong, in certain situations. We can all agree on some things.

We think there are many things going on in the world today that are just plain wrong. Obviously wrong. One of those things that no sane person with a sense of right and wrong could possibly agree with. Yet, they exist. People who are sane and moral and proudly support an obviously immoral thing. Those are the people American High wants to reach.

So, we’re not afraid of alienating our fan base by pointing out immoral things that are going on. We hope people will take a moment, hear the message, and ask themselves honestly, is this something I can morally support? Even if it’s a belief they’ve had forever. People who don’t care about right and wrong will never be American High fans anyway.

First some background:
In July of 2008 in Maryland, USA, a man named Cheye Calvo returned to his suburban home after walking one of his dogs. Inside he found a scene of absolute horror. Over a dozen highly armed and violent intruders had broken into his house. His mother was bound and lying face down on the kitchen floor in tears. Mr. Calvo was zip tied and thrown next to her. Then the Calvo family watched in horror as their two beloved dogs were shot and killed. One was shot in the back as he ran away. The intruders spent the next four hours systematically destroying the home. They destroyed furniture, broke cabinets and tracked the blood of his pets throughout the entire house. When the ordeal was over the assailants simply left. They didn’t even have the common decency to apologize.

The violent intruders were not street gang members. They were not foreign military invaders. They were not ‘illegal aliens’. The intruders were police officers.
County police conducted a ‘no knock’ warrant on Mr. Calvo’s home that day, and according to him, they simply kicked his door in and came in shooting. Police never found evidence of ‘illegal’ drug involvement that day. Because Mr. Calvo was not involved in drugs or the drug trade at all. Cheye Calvo was the mayor of the town.
We want to bring attention to this event, and to the bigger picture. Why did police storm that suburban home that day? It was in order to enforce drug prohibition laws. One of the most important sociological experiments, with some of the most definitive results, was conducted in the U.S. from 1920 until 1933. But we, as a people, have forgotten history. And you know what they say when you forget history.

Alcohol prohibition resulted in the rise of the mafia, the utter corruption of police forces across the country, the filling of our prisons with nonviolent alcohol offenders, it cost a lot of money and worst of all it didn’t stop anyone from drinking.

Today we have drug prohibition. Do any of those consequences sound familiar? Drug cartels in Mexico are now more powerful than the Mexican government. Over 30,000 Mexican nationals have been murdered in the past decade, as well as countless Americans murdered in the streets. Police corruption in Mexico and the U.S. is a well-known fact. Here in the U.S. over one million people are in prison for nonviolent drug crimes. And in spite of spending many billions (maybe trillions) of dollars, more people smoke pot today in the U.S. than the day it was made illegal.

With ‘Cheye Calvo’ we are trying to deliver 3 points: First, if military police attacks on civilian homes is necessary in the ‘war on drugs’, that in and of itself is a reason to end drug prohibition. Second, the only way to enforce drug prohibition laws is to allow things like what happened to the Calvos. We hope people make the connection, if this happened to a white, upper middle-class major, what do we think is going on in the inner cities every day? And ultimately, laws which seek to eliminate some basic part of human nature (like the desire to become altered) not only do not work, they have catastrophic consequences. The evils associated with drug prohibition far outweigh the benefits to society.

Our first record. We love 60’s and 70’s rock and roll as much as we love 80’s and 90’s punk. I, for one, believe they all have more in common than not. Listen to ‘Help’ by The Beatles. The tempo is faster than most punk songs. Bones/Flowers was our musical attempt at using ALL our influences, together in the songs. To create our own sound. There are lots of deeper meanings throughout. But it’s no fun if someone just tells you about them. I will say the title is a sort of commentary on the notion that rich people are generally good, and poor people are generally bad. In our experience, it’s just not true. Sometimes, there are flowers in the basement. And the bones are in the attic. If you see the CD cover, look in the windows for a lot of clues.

I think bands should promote themselves however they want. Wait to see which one’s the people like most, pick the songs ourselves, whatever floats your boat.

We wouldn’t know. Our musical interests have changed over time. We don’t listen to punk coming out today. That’s not to say it’s bad, or not as good, we just like a lot of different stuff and the punk we dig is the punk we’ve fallen in love with. Old punk.

Probably. We’re going to see how this next single is received, and we have at least two more that will be released before the end of the year. If all this attention continues to build, then yes we will be releasing our second record next year. Probably just before summer.

Well it looks like will be touring England and Ireland Scotland in November. And if this next single is received well and college radio, like Cheye Calvo and like the record were, will be touring the US to.