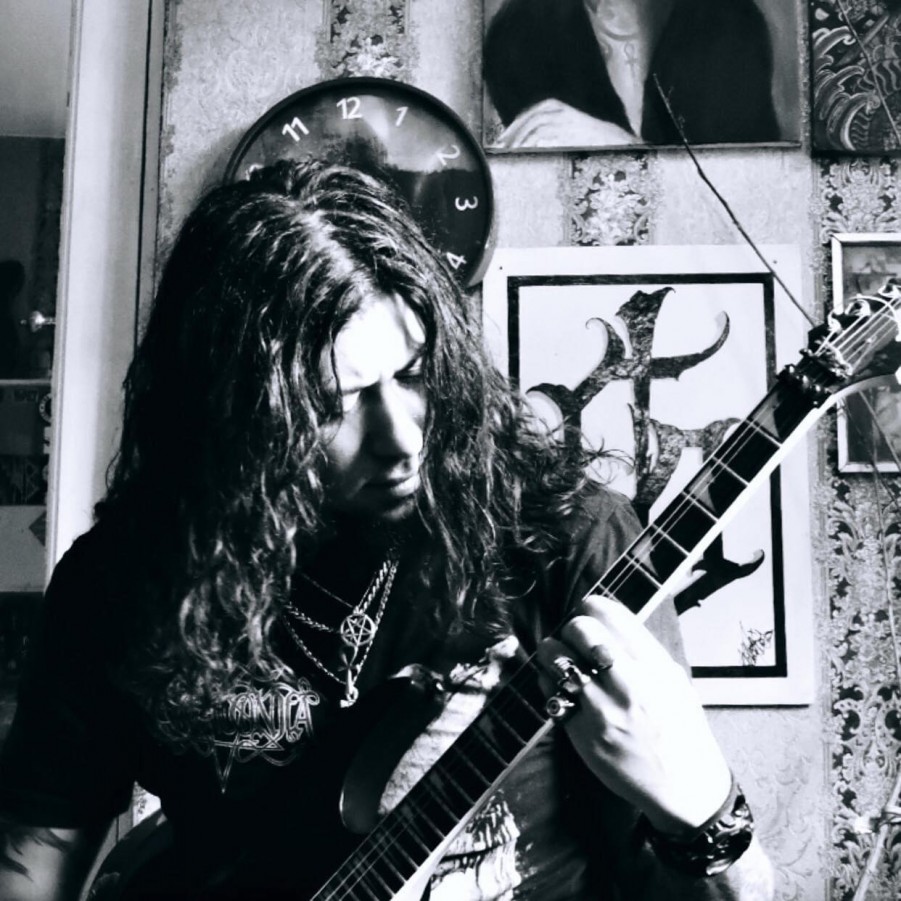 It is said that you are really supportive towards the bands in Cairo. We found you with bands such as Veritatem Solam and then we found you on stage with Nader Sadek, so tell us more about these experiences?

Oh yeah, Veritatem Solam got my attention once I’ve heard about them. M. Salama and Bahaa ElDahaby are close friends of mine and I helped them with designing their album cover for Unholy Protrusions of Divinity. We share the same melodic themes and musical influences, so of course that counts. They are a unique and a very good band.

About Nader Sadek, I’ve met him in a gig and we got to know each other. He’s really generous and fun to hang with and discuss things. I didn’t know about the gig, it came up as a complete surprise. We didn’t play any music together and then suddenly I’m on stage with Nader Sadek, Attila – Mayhem –Void Ov Voices, Tom Geldschlager – Obscura – Hannes Grosmann – Alkaloid, Blotted Science, Ex-Obscura, Ex-Necrophagist – Orestis Nalmpantis – Genna Apo Kolo – Dimitry Khoury – Mephostophilis and Seth Van De Loo – Sever Torture. So, yeah it was big time for me being there on stage with international professional musicians. The crowd was awesome, lots of energy and I enjoyed my time. It was an awesome experience to be back on stage after a long time off… still feels like yesterday.

How did you receive the feedback of the audience?
Actually, I’ve never seen an audience as active as the audience was at that night. They were highly supportive and appreciated the new style with decorations with all the sounds and lights. Yeah, those guys deserved the best of what could be and after all, the credits should go to Nader Sadek for planning the whole show, as well as setting the stage him self. He did a great job for sure and the rest of the guys played really well.

Any future plans for Sallos?
Well, Sallos has always been real and straight going forward since day one. So, nothing really changed than to be the heaviest-darkest-extreme band around so we’re working on that as we are preparing to bring you guys the new album.

So, a lot of fans asked about the genre and the lyrical themes of your band. Would you please clarify the lyrical themes of the band and the concerns?
Yeah I’m used to that question. Ah well about out lyrical theme, I had a lot going on personally and the lyrics is a reflection of how a person feels living in this twisted kind of society and there is a lot of brainwashing and mind control going on, so it’s a reflection of what is going on really from my point of view.
The 1st album had a lot to mention. We talked about Dark minds, war, solitude, resurrection, madness and confusion. It has many colors and a classical melodic theme. That was my mental state back then when I wrote the album. It was the best place to lay down all my feelings on Sallos, so yeah… About the new album, which we’re about to release, entitled World Of Machines, is a concept album. Governments worldwide are enslaving the human kind. Lots of meanings and morals are changing after the millennium, so it’s more real and touched by everybody through the normal living day. You watch TV, you read newspapers and have a great image of the world where we are living in today. The topic is a big deal, so yeah it’s going to be heavy, straight in the face, and a different level of musical evolution for Sallos and into the concept. After all, I leave the listeners to understand and evaluate the records the way that suits their imagination.

Tell us about your name Lord Of Darkness?
The media is a double-edged weapon, especially in this country. Once, I was given an interview for one of the local newspapers about my tattooing work and Sallos as well as going through the music concept, to clarify what’s heavy musical metal. So, the newspaper of course used it as the highlight event and again just empty low moves done by a low cost selling newspaper, from there came the name Lord of darkness.

You are one of the first generation musicians, how do you think the scene changed?

I’m totally honored to be. Yeah, there have been lots of changes for sure since early 2000s. Now, it’s more available to every one. Back then, we used to trade tapes and travel across the country to get a good album or even a poster. Now people can get anything through Internet. Back then we used to paint our t-shirts and do our own accessories, so yeah we fought for being around,and for more change, and for the metal community to grow and break the taboo.
You know, the normal nickname for metalheads in Egypt is Satanists, the past years to form a band or just to say that you’re fond of a specific genre of metal was terribly hectic. Now people are slowly trying to realize what is it all about; mental and spiritual freedom. That’s our choice, and that’s how we face mind control and fascism. It’s as simple as that, music is very powerful as we as any kind of art. And I really think the scene will grow by getting big bands from abroad, as well we the Middle East. Now, Iron Maiden went to Dubai and India, why not Cairo? If we gathered our voices we might apply our rights to enjoy and have good times within the scene.

What about concerts? In your opinion, what are the main problems in concerts?
Concert… well, for me I think just metal concerts cant all be around Sakkia. We just can’t be all about performing in the same venue – with all due respect to El Sawy Culturewheel. It’s a good place, but we need more stages and more places to perform, as well as having more competition and larger audiences. The problem mainly is the sound systems, cause I believe that sound engineers don’t know the culture of Metal in Egypt. So, we really do need highly educated sound engineers to do the magic, and help the bands sound better on stage. For Sallos it’s a bit different. It’s a matter of coordination and arrangements. You can only imagine how I lose myself in my dark room, composing – doing my artwork, writing the lyrics and recording the album.
Troy, our bass player is helping me out recording the new album, while Kimmi, – the drummer – and Tike – the original guitarist – are stuck out of town building their life which is very normal, it’s not easy to try to arrange the whole band to be in one place, prepared for the battle to hit the stage.

Will we see Sallos on stage soon again?
Definitely Sallos are hitting the stage in the right time with the right bands and in the right gig.

If I give you the chance to send a message to the Egyptian metalheads through Rock Era magazine what will you say?
I would say keep going guys your support is all what matters. One more thing: Metal is in the soul and the attitude more than anything else. Stay true and thanks for the awesome support. m/

– Check our previous interview with Sallos, the band here.