Rock artist HERE LIES WES has signed with Wormholedeath a deal for the EP “Pieces Of Me”, due for release on May 20th, 2022.
WES is one of North Carolina’s most talented singer, songwriter in alternative style genre.

WES speaking of his EP, stated: “This album is like a doorway to different times of my life. Each track was written from tragic moments in my life . It’s hard to keep that emotion bottled up inside so instead of crawling in a hole and dying, I took the pain and wrote the pieces of me. Remeber you are not alone“

HERE LIES WES is an alternative indie rock project. With his grungy riffs ,to his emotionally driven lyrics, puts his sound on the map , with some of the best artist in the world. From (Staind) Aaron Lewis, 10years with a tangled twist of the late 90’s alternative/rock. From artist like , Bush to Candlerbox, his musical talents definitely earn the right to be on this list of known artist. Built from the pain he endured growing up, and bouncing from place to place with having divorced parents. In that time of madness he always had a guitar, that would later forge the musician that he had become today. This self-taught singer- songwriter, portrayed as a (nothing bothers him) type of person, Wes struggles with depression almost on a daily basis that has lead him to be the alternative rock musician that he is today. In late 2017, Wes hit the local scene in his hometown, Asheville not knowing later in 2019 he would share the stage with legendary bands like Powerman 5000 – Adema and Hed pe. He knew then that his alternative style meant something to people. He now calls this his extended family. Wes endured many musical defeats as an alternative indie artists, but with persistence and dedication in early 2022 he just signed his firt deal and partnered with Wormholedeath Records in releasing his first album titled “Pieces of Me”, under the name HERE LIES WES. Including tracks like “Broken Hearts” and “Resistance”, he hopes to flood the music industry and he’s thankful for his achievements as an artist.
Currently he is concentrating on writing his second album “Wasted Tragedy” and hopes to have it out summer of 2022. 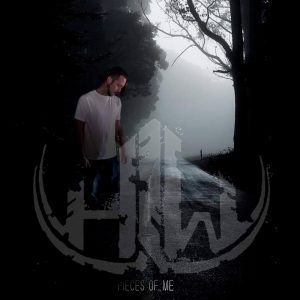