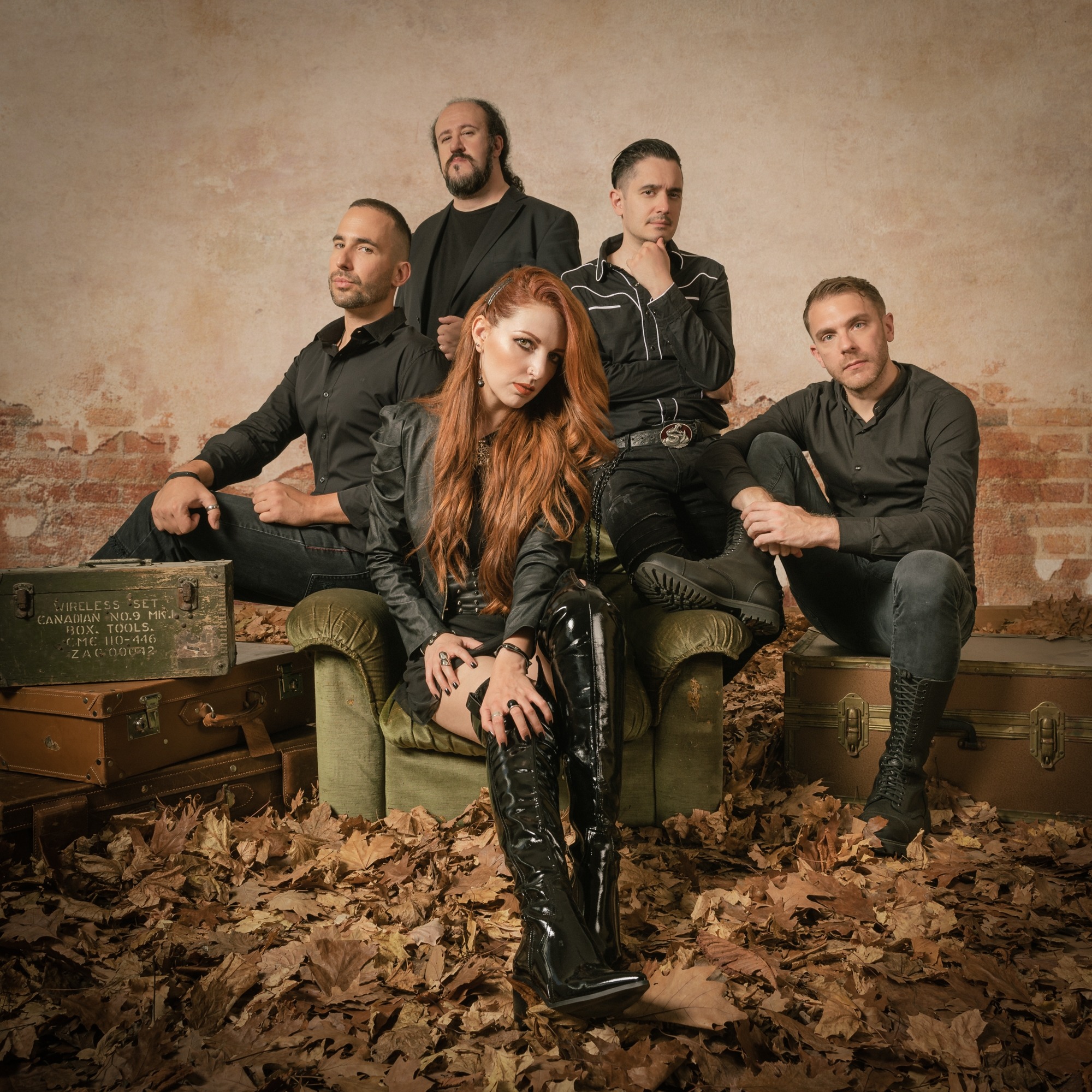 The Italian Power Metal/Symphonic band is younger in age than you might think, however, the components aren’t any new to the metal scene.

What consists of their newly going to be released album “Lunaris” are what you need in your daily introspections. Not only that but of tales and legends to discover through whispers, growls and solid power chords, simply enough music to dream about your next travel in time and space. No need for any fancy spaceship, just get your earbuds ready! Meanwhile, let’s get to know them more about the Moonlight Haze.
Have a nice journey…

First of all, I would like to congratulate you on your second album “Lunaris”. Great work and well done!
In the beginning, we would like to know more about your band!
CHIARA: We are a five-piece Power/Symphonic Metal band based in Northern Italy, founded in 2018 by Giulio Capone and yours truly. Our debut album “De Rerum Natura” was released in 2019 and we are going to release our second album “Lunaris” on June 12th again via Scarlet Records (and via Avalon/Marquee in Japan). The line-up is composed of me on vocals, Giulio Capone on drums/keyboards, Alessandro Jacobi on bass and Marco Falanga and Alberto Melinato on guitars.
We like to play metal blended with classical music, electro, pop and folk influences.

1- How did you meet up and how was Moonlight Haze born?

CHIARA: The original idea of forming Moonlight Haze came from our drummer/keyboardist Giulio Capone. We had been playing, writing music and lyrics together for our former band for almost four years. By the end of 2018, I received a call from him: he told me that he thought that it was a pity not making music together anymore and asked me if I was available for starting a new project with him. At that time I was feeling quite surprised by his idea and wasn’t sure I was ready to form a brand new band and start all over again from the beginning. So I told him that the idea was cool, but that I needed time to think about it. But… a couple of days later I received an e-mail from him: the object of the message was “Top secret songs” and it contained three demo songs that he wrote in the attachment. That night I wasn’t able to sleep, because the material was just too cool and I stayed awake the whole night and wrote all the lyrics for them. Then I called him the day after and told him it was time to look for the band members to complete the line-up! The three songs he sent me ended up being included in our debut album and that is how Moonlight Haze was born!
ALESSANDRO: I was the last one to jump on board. Basically the line-up was ready and the first plans already set. They just needed a very handsome bassist, other skills were not needed because you can’t hear the bass anyway.

2- Tell us more about your journey in music, how and when did you start singing or playing?
ALESSANDRO: I started playing the violin as a kid and went through all the standard (at that time) classical training. At 14 I went nuts so I switched to bass, and my musical journey basically turned upside down when I joined Elvenking in 2011. Since then it’s been a lot of fun!

GIULIO: I play the piano since I was 5 years old and after my classical studies I was pretty bored about it so I switched to drums but I still consider myself mainly a pianist rather than a drummer.
Starting from 2001 I’ve played with many power metal bands and in 2018 I founded Moonlight Haze with Chiara.

3- Behind every album and song, there is some stories, memories or moments, how did you come up with “Lunaris” themes?
CHIARA: When we started writing the material for the new album last summer (yeah, just a couple of months after the release of the debut) we were still very excited and happy about the positive feedback and vibes we got from the audience about “De Rerum Natura” and I guess this fact deeply influenced the commissioning process. So we just followed our stream of inspiration and the songs came out in the most natural way. Giulio and I really felt like our empathy and synergy were growing stronger day by day and this gave us the chance to work very quickly and to discuss every single detail of the new songs.

4- What is your music writing process? And what inspires you while writing music?
GIULIO: I usually find the perfect inspiration in very common daily situations like walking around the block, playing some videogames, or maybe just watching a cool inspiring picture. Sometimes there’s not a precise inspiration, I just sit down and start playing and music suddenly comes to life. In Moonlight Haze we have a pretty good commissioning process, quick and reliable: I write a bunch of new songs, usually, around 20 and I try to track the most realistic pre-production I can. I like when rough pre-production can be perceived as a full song by the other guys. Then it’s time for lyrics and vocal melodies and final arrangements, guitar solos, and a detailed editing process to make the new songs running smoothly.

5- To melt the ice, I’m curious, who gives you that very special admiration, respect look that keeps you wanting to play music or sing forever, a family member, a partner, fans on the stage? And how much of energy does it give you to keep going?

ALESSANDRO: For me, at least two of those you mentioned. My family has been extremely supportive through the years, and I really owe them some of my biggest past achievements, for which I’ll be forever grateful. Besides, live music is what basically drives me on. I mean, recording albums is fun, promotion is fun, social media is fun (well…sometimes), but playing in front of hundreds or thousands of people who sing your songs and bang their heads along with you is priceless and can’t be described if you aren’t there!

6- You have now three video clips with a one lyrics video and 2 albums, do you think there should be a time pace to respect between an album and another? When do you feel it’s the right time for a new album? What is the vision of Moonlight Haze?
CHIARA: We don’t feel like we have to stick to a rigid schedule, but we prefer to follow our stream of inspiration. So the right time to write a new song/album is when we feel like it!

7- I’m a big fan of oriental music and culture and the melodies, intros that we find in The Butterfly Effect, The Rabbit of The Moon, To The Moon And Back, captivated me really, it’s like your signature, as I believe it captures many of your fans, why this choice and who’s the brilliant idea was that?
CHIARA: We all are into the oriental culture in the band, but the original idea of introducing the Asian folk instruments came from Giulio. He has always loved those kinds of sounds and I could see he was the happiest person on Earth when he found out that there was the chance to have an actual guzheng player to record some parts on our first album! In the second album, we increased the presence of such influences, but it was nothing planned… they just fit in the songs from “Lunaris” so we decided to keep them.

8- In music, who is your “Master” and eternal teacher? What did you learn from this person?
ALESSANDRO: Music itself, because you never stop learning. If you feel like you have nothing to learn anymore, then your journey has probably ended.

9- Reflecting today on the Metal scene in Italy, Europe or worldwide, what do you think that should be done in a better way maybe? How do you wish Moonlight Haze to be distinguished?
ALESSANDRO: I usually don’t like to talk about a “national scene”, because IMHO is not a very useful categorization (like “female-fronted metal” etc.). There are good and bad bands, good and bad venues, good and bad promoters, like in any other country. If anything, I think the chronic sickness of Italy is that the heavy metal audience is very limited in comparison to other countries, so my aim has always been to distinguish myself and my projects in an international context, not in one country or another. Isn’t music a universal language, after all?

10- You are on a tour and in your van, you have an empty seat for a very famous musician from the Metal scene, because he/she wants to be with different people and choose you, who would you wish for to be in your van? What music, albums would you pick up for the road trip?
ALESSANDRO: If I end up having Steve Harris or Joey Tempest sitting next to me, the poor guys would be stalked every single moment and would probably jump from the running van to end their suffering.

11- Where do you want to play soon? Any particular festival? Why this festival?
GIULIO: There is no particular festival we would like to play at. Every single live situation is completely different and we really can’t wait to play live our music. Of course, main live events like European festivals would be just perfect! But I love small clubs as well!

At last, a word for your fans or any teasers or surprises coming soon!
ALESSANDRO: “LUNARIS” will be out on June 12th, but that doesn’t mean we will be silent until then. Follow us!