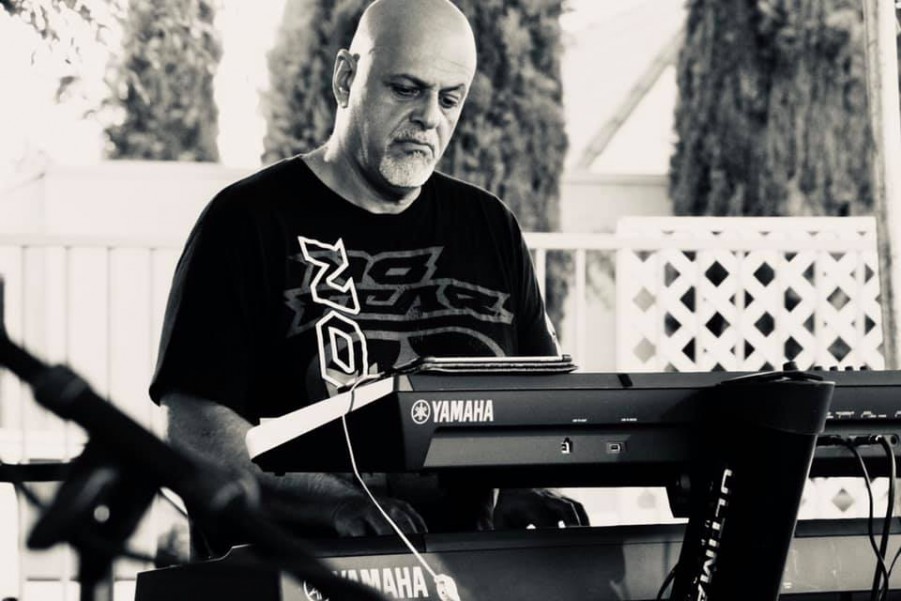 Hello, Vittorio! It’s a pleasure to speak with you about your thirty-year career as a renowned music producer. You are a composer, arranger and producer. Of the three, which do you enjoy the most and why?

I love music in every single way, so this is a very tough question to answer.
My main activity as a composer is to create soundtracks for films, music for live shows, always trying to combine both, my passion and my job. My father gave me a piano when I was just a kid, so I had a lot of opportunities to experience music even if I didn’t know where to start. I kind of created my own bases

I decided to be involved in the direction of music basically when I started composing.
It has been very exciting and very truly collaborative being able to work in some different areas.

You spent many years in the TV and radio industry. How did you get involved in TV and radio? Which did you prefer more?

As a youngster, I was out of work and knocking on lots of doors. I tried and tried to enter the wonderful world of cinema and television, until one day a phone call from Rome cut the bull’s head: they were looking for people to write the music for a new Rai show, Rai being a national channel and one of the most watched without a doubt. I have been several days without sleep, I realized I was at a crossroads. But in the end, partly out of curiosity and partly out of necessity, I have I decided to accept. And everything has changed since then. I moved to Rome and discovered that making music was not just my passion, but my whole life. The first few times it was really a very strange effect, to see a famous person dance to one of my music, written by me a few days earlier. The first program I worked on was called “Domenica In”, an iconic show of Italian television comparable to “Sabado Gigante” in the Latin industry or “Saturday Night Live” in the United States. Then came the other programs: “Mi Raccomando”, then “’Medina” and the collaborations on Radio with Jettyranx, and many other artists.
For some years now, however, thanks above all to my move to the United States, I have been able to work on even bigger projects, live concerts and to organize my own events, to choose the music, to compose it and to direct.

You were also the creative director for many important commercials, working with some of Italy’s finest voice-over talents. Any favorites that you worked with? Any funny or unusual stories you can tell about doing these commercials?

The inspiration came once again from music: from the piece Medina by Pino Daniele. Needless to say, the late Pino Daniele has been an absolute icon for Italian music – he performed with legends of the caliber of Richie Havens and Eric Clapton, with whom he was friends.
My success thanks to the collaboration with him came unexpectedly. in a decidedly risky and delicate moment of my career, but I believe that the collaboration with Pino Daniele was also a moment of opportunity that I was able to seize, managing to understand what were the needs of his audience, proposing a sound that knew how to combine creativity , rhythm and soul. My career from that moment on has grown rapidly because I believe it has anticipated offering something new in a musical scenario, which has remained unchanged and unchanged for years. Furthermore, from the very beginning with my music I wanted to create something contemporary and communicate it immediately, taking advantage of live shows, as I did for example with Max Giusti, and also the power that social networks offer us today. Not to mention the young artists I collaborate with and who are taking inspiration from our collaborations to create real digital channels, a great opportunity for personal and professional growth.

Looking at the future and the past I can only be happy, excited to have been able to collaborate with so many valid artists, even if the path is not always all that easy.

You produced “Party of the Century,” which featured a who’s who of names in the music industry, including Bobby Kimball, David Paich , John Mahon , Leland Sklar, Simon Phillips, Steve Gadd, Ron Carter, Peter Erskine, Greg Phillinganes. How did that project come about, and how did you get involved?

It’s true, and it’s called The Party Of The Century, probably the most spectacular music record project I have ever created. Two years of intense work all around the world, 30 of the world’s most influential and legendary musicians put together by the tireless enthusiasm of the young talent Giorgio Onorato Aquilani. Wanting to make something remarkable, Giorgio wrote down 10 original songs together with his lyric partner Ivan Nossa dreaming to involve the best musicians on earth.
Giorgio’s concept for his new album is the vision of a “big mansion” hosting an unforgettable music Party. Giorgio reached out to his musicians friends and heroes like: Bobby Kimball (TOTO), David Paich (TOTO), John Mahon (Elton John), Leland Sklar (Phil Collins, James Taylor, TOTO), Simon Phillips (TOTO), Steve Gadd, Ron Carter (Miles Davis), Peter Erskine, Cherisse Osei (Mika), Charlie Morgan (Elton John), Ted Jensen, Greg Phillinganes (Michael Jackson, Stevie Wonder, TOTO), to name a few, and got back an incredible number of “I’m in man!!!”. The Party crew so stepped up, adding their individual specialty to what has become an exceptional original music project.

You had the prestigious opportunity to perform for The Pope! How did that come about, and were you the least bit nervous, performing in front of 300,000 fans?

Pope Francis’s stage was an exceptional stage. Performing in the presence of POPE FRANCIS was a real challenge, me and Max the comedian who accompanied me, we did not sleep for days, a bit because singing in St. Peter’s Basilica is something truly solemn, a millenary history that contains the mysticism that you breathe there, and then you get excited with the notes and the musicality that come out of your soul, and doing it in front of the pope is something absolutely indescribable. It is true that there are all the instruments around you that accompany you, but you make the melody, it comes from you. I am also convinced that if you get excited, everyone else gets excited. Singing is also transmitting one’s emotions to the public. And I believe that Pope Francis felt exactly what we wanted him to receive.

What has been your “crowning achievement” in the music industry, so far? What are you most proud of accomplishing?

After so many years in the world of music I can say that opening my own record company was the greatest goal I ever managed to achieve.
The courage I had in 2009, in full record desertification – with record stores closing one after the other – to make room for the internet and technology, led me to create FunkySworfi, which, a few months later, became also a small but indomitable independent label.
Thanks to my career as a very active musician, having been able to play in numerous bands of extreme jazz music, conducting radio programs, web radio and organizing concerts in many clubs and social spaces in the city for years, my record company is to become a point of reference for the American and Italian underground. And precisely by virtue of my role we decided to ask Massimo to talk a little about his business and above all, to tell us how an independent record company in our city is doing nowadays.

Tell us about “Relax In The Cities?”
The city of California has always represented an important point in the world of clubbing and live events map. I believe Los Angeles has become one of the protagonists of the global scene year round, not just in spring.

California has taken its place as a protagonist on the global music scene with important labels, DJs, musicians, producers – everyone wants to live in LA, which is in fact the main attraction of the music biz today. And in a cascade the people flock to be part of that multitude of evenings with stellar names as much as underground that do not make you regret the relaxation of smaller realities for nothing.

You are currently working with Arcane Global Media in Hollywood, and you’ve scored Damon Jamal’s latest film. First, how have you managed to adapt to life in LA? Second, what can you tell us about the music for the film?

When I left Italy, I did it without looking back, many of my friends and relatives told me that so far away I would be and feel alone. This was actually the case in the first year … but then things changed. The United States has a great influence in the world of music while Italy has become weaker in recent decades, although I must say that lately some Italian rock bands are also managing to reach the United States.
In any case, we Italians live well in all the places in the world where you put us.
The movie tells a story, a late-night DJ at the hottest Radio station in Atlanta struggling to find his way back to the top after being dumped live on-air. In his journey to revive his career, a woman that once called his show seeking love advice enters his life and that is where things begin to entangle.
In short, a love story of music and passion that is worth living.

Any upcoming projects that you have lined up?

I have many projects underway that are about to be launched. However, being Italian, for good luck I will not reveal anything before the official releases. However, I can name you artists, like, Ludovica Cola, Damon Jamal, La Tonda Hardy-Davis, Robert Mills, AB Management, Andronic Music and some many more collaborations and live show such as my personal music party FunkyParty, but let me do not reveal too much.

What do you hope that people will remember about you, when they hear the name “Vittorio Iue`?”
I wish I could be remembered as a good artist, as someone who characterized his era, as one of the leading musicians of the music scene of his generation, an artist with personality who had something to say, like the greats of previous generations, those of the years 60s or 70s.

Thank you so much for taking the time to speak with me today. It’s been a pleasure. Best of luck to you for the future!