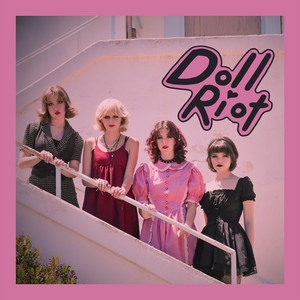 With artists like Olivia Rodrigo rising to prominence, and artists like Avril Lavigne making a comeback record this year, the world is more than ready for pop-punk and grunge acts to get more mainstream success. With that being said, a lot of youngsters picked up the genre and among those youngsters were four high schoolers from North Country SD to form a band that covers famous Rock and Punk bands.

They named their band “Doll Riot”, and after some pandemic-related obstacles and a drummer change, they are releasing their debut EP. The EP is self-titled and comprises 3 Tracks. The first track “300 Years” feels like it belongs in a retro show or a rom-com movie. The high gain and predominant snare drum will appeal to punk fans so much. The second track “Paraesthesia” is highly catchy and sounds almost like it’s out of tune due to the amount of overdrive. The final track “Fuck You” is my favourite track. The music suddenly stops for the vocalist to make the statement “A douchebag of your magnitude could cleanse a whale’s vagina, fuck you” and it’s the most hilarious and sincere thing ever.

The overall vibe that the EP has will remind you of the 2000’s punk and the vocals have an angsty attitude that helps the emotional delivery. These four girls have incredible potential, and it’s crazy how they show it with 3 short songs like these, that have no dull moments.