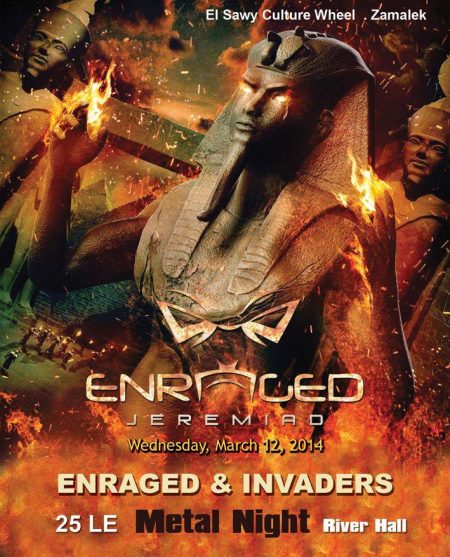 “Leave your sanity at the door!” A phrase repeated by the Experimental Metal band Enraged band through their publicity posts of the freak show they held with the reborn Iron Maiden tribute band Invaders. This phrase proved the old theory of “”If you tell people the eye of the truth straight, they will completely disbelieve you!” But we’ll come back to that later.

Before reaching ElSakkia I made a few calls with the most helpful Mr. Kareim Al-Sharkawy – the one behind arrangements and organizing the whole night, passes are delivered, while waiting for my partner in crime, Lina El-Gohary – our photographer – I had a stroll around ElSakkia grounds chasing the scent of good old times metal was a hard deal to seal in this place, this same place we used to skip schools and lectures to attend various events that had the deepest impact on our social life and musical tastes.

Nostalgia conquered the air around the stage inside and out. I was astonished to realize that some of both bands’ members came with their new-born children. OH. MY. GOD! We are at the point of handing the flag to next generation. It was a joyous scene to see them walking hand in hand with their younglings.

I always hated the kind of reviews going like “Fans came in, bands rocked, riffs, blasts, blablabla. All good. Bye bye” That’s why I insisted on being there before the crowds to sneak inside the sound check and tough the music in the making. Spirits were on fire and everyone was happy and running around, every band while sound checking threw jokes at the other band. I was happy, I caught the atmosphere.

Numbers weren’t something to be happy about. I mean after Adham Kafafy of Anarchy‘s speech last month about support and the astounding feedback from the audience, I expected a form of determination in numbers but, I was wrong. However, in the weak light in the dark were some faces whom I recognized supporting each and every metal event. Dear comrades, respect. With lightening speed riffs and signature screams of The Bruce Dickinson, Invaders kick started with “Be quick or be dead” shocking the audience who wasn’t familiar to old school heavy metal being live-played at this point of mastering, everyone stood there watching bulgy-eyed like it’s their first time they hear metal – and that’s the greatness of the MAIDEN people! They played with so much passion, I caught myself dancing around with a silly smile all over my face, which I noticed was a common feeling for all the fans there.

Track listing included; Wrath child, The Trooper, The Number of the Beast, Flight of Ecarus, Fear of the Dark, Hallowed be Thy Name and more.

With a little flaws to be pointed out, their act came out just fine and entertaining with a dual play from Elie Naggar and Mohamad Emam (Guest Vocalists) and a special appearance of EDDIE THE HEAD – Iron Maiden’s Mascot for those who don’t know -whose appearance is a tradition Invaders used to do every gig since forever.

Enraged took the stage next, and took every hope of audience leaving the place with minds intact away, with their powerful – yet political – tracks they threw a spell over the stage, a very quite mood possessed the next phase of our gig. To take a wider look upon what’s going on I took the highland, while at it I bumped in a very familiar “masked” face, he vanished inside the locker room leaving me with one question in mind:“What the hell are they up to?”

Starting with “Accomplices” followed by “Mirrors“, their audience became familiar with the type of music Enraged plays, then taking things heavy playing “Ma’at” that started with some ( تخييش ) as literally said by Wael of Enraged’s guitarist who turned the bad situation to a storm of laughs.

Remember the “familiar, masked face” I told you about earlier? Well, he freaked me out. That was Mr. Skizzlezee, a WWI veteran who was consumed by the deadly fear of bombs, with his asylum inmate’s white suit and burned faces’ mask crowned by a mysterious symbol. He sung “Shell Shock” which was the next crazy track they played. From this point on their music got suddenly multi-layered with the help of Skizzle Zee’s monstrously changing vocal chords between every verse. This track is something to stop at; rare in Egypt to find a music band crazy enough to project such melancholy on stage. See, the band was caught in it so deep they kept falling to the floor and headbanging then standing still all over again. With the perfectly conducted stage acting of Mr. Skizzle Zee who was running from the sounds of the bombs created off guitar riffs and keyboards screeching sound; for a moment all the audience were laughing madly! A scene not to be believed if not seen in person. The very long track ended for us to realize that Mr. Skizzle Zee is no one but Sammy Sayed the front man of Brutal death metal band from Egypt: Scarab!

Cutting loose from the melancholic fog in the stage, Wael gave an appreciation speech letting the space for his band to tune-up and get it all together again to start “Down” that had a speech inside it – not sure whether it’s a part of the track or just Wael improvising. And again to a heavier track “Hypatia” leading to a track, he started by this line: “The madness you see on stage isn’t fake. We REALLY are that crazy! And please don’t get on my nerves!”

“Jeremiad” was the ending of the night, for those who didn’t attend I tell them that it was a decent track with Wael hitting his band members, forcing them to headbang even his own wife – the lead vocal Rasha – throwing his own guitar to the floor and stepping on it. Last but not least; he MOSHED with the whole crowd! A real mosh-pit broke out suddenly between him and the crowd who went euphoric along the act.

1. Thanks to both bands for a concert rich in emotions and music. Thanks to the organizing team from the merchandise table to the backstage who were very cooperative and friendly.

2. To prove their utter support for each other, many of other bands’ members showed up enjoying the night. Some of them are; Sayed Ragai from Sinprophecy, Mohamed Sa’eid from Destiny In Chains, Hani Sami, ex-Sinprophecy, Ehab Khaled from Medic, Mohamed Hassani from Sand Aura, and many others.