Dr Mann is an Australia-based Post-Punk/Indie Psych band consisting of Danny Mann as the lead vocalist and multi-instrumentalist; Ines Burton on vocals, percussion, synths, and guitar; Jaryd Miles, who is the bassist and  vocalist; Julian Bouliter as the percussionist; and Stefan Unternaherer as the guitarist. The 1960s and 1970s West Coast cosmic country and present indie and psychedelic musicians like The Oogers and The Go Betweens are among the band’s inspirations. 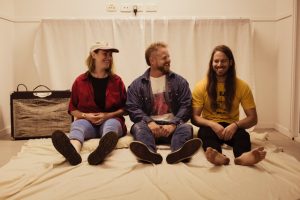 This is the third single that Dr. Mann has released. It is the first single to demonstrate a transition away from a Psych Country sound and toward a sound that is more indicative of Indie Psychedelic. Ines, who plays synth in the band, and frontman Danny both contribute vocals to the song. The band is now hard at work on their debut EP, which is expected to be finished within the next few months.

Due to the British Post-Punk influence on the music, the first impression of the song is that it is pretty similar to the Arctic Monkeys. It does, however, also employ some Psychedelic elements, which gives it its own distinct character. The similarities between this song and songs from the Arctic Monkeys’ album, “AM,” arise from the song’s minimalistic yet dark lyrics and simple guitars, which automatically place an emphasis on the vocals. The somber melodies make for an incredibly captivating track, as it begins with a grooving drum pattern, exquisite bass lines, and guitar riffs that bring the entire track to life.

Thematically, the lyrics resemble syllable-stuffing accounts of indie nightclub culture, with sleeker, more blue-black undertones. They feel as though they portray the narrative of a self-proclaimed romantic attempting to find meaning in an unromantic world. It shares many parallels with its British post-punk contemporaries; nonetheless, “Ciggies” demonstrates the band’s creative and musical prowess with a confidence that distinguishes them from their UK rock peers.