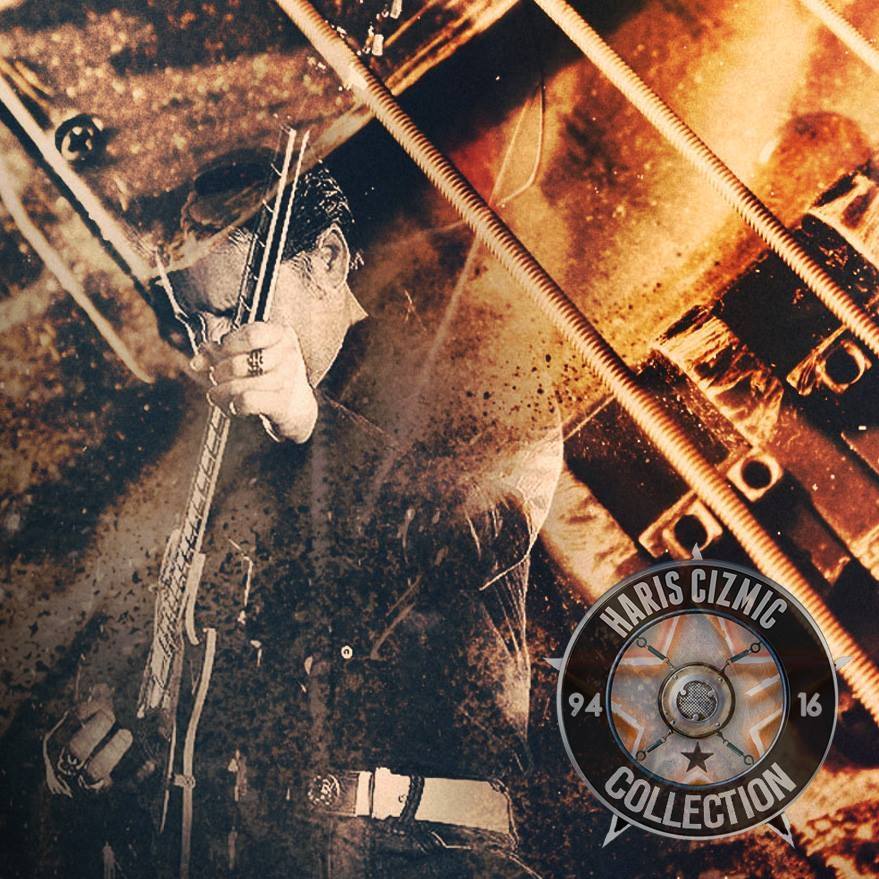 A few days ago, I was lucky found to find Haris Cizmic 2018 epic pop-rock tune Breathe In Water with the magical voice of his wife, Aleksandra. Actually, that excites me to ask more about his long-honorable history as a musician, composer, songwriter, producer, artist, and art director. Let’s find out!

● First, I’d like to salute you for such an impressive portfolio. How was the Bosnian music scene back then?
Thanks, Mena. To be quite honest Bosnian music scene was really great during the war (92-95). We played hard in generator-powered clubs with no heating, water, food, warming frozen fingers on stages in front of hundreds of excited people. We had angry musicians which make for a great metal, rock, alternative, and punk scene. Today, the musical landscape in Bosnia is probably the most miserable and pathetic in Europe. There’s almost no rock music anymore, everyone is tripping on something I would never call music. It’s a disgusting display of a primitive (almost illiterate) mix of folk, pop, and rap. They are trying to imitate the world’s top charts, but watering stolen tunes down to the point of insult to a musically trained ear. No amount of voice processing and expensive production can’t hide it. It’s just bad (laughing)

● You’ve started as a metalhead and later you expanded your styles. Do you think a musician should add variety to his music career to implement other achievements?
It’s a personal thing, but in my case, I was never a “one style” musician. At one point I earned for living my writing songs for children festivals (and won several awards in the process), I was producing other genres and artists and I did many TV jingles, openers, film, and theater scores. Bun in my youth the only thing that stepped up above everything was the fastest, most powerful, and hard sound I could find. And I am still a very faithful Metal fan. Many of my childhood idols are still going strong (like Voivod and Megadeth for instance) and their music always inspired me to try and merge styles and genres. Even Slayer did it on “South of Heaven”…

● Your EPK mentioned that ‘Breathe in Water’ is an Indigo Dying cover song. Can you please explain more?
That’s a strange story. It was when Aleksandra and I were just dating that I heard the tune and instantly liked it. It kinda communicated those feelings you have when you’re in love and since we were in a long-distance relationship, the sad undertone of the song perfectly matched that emotional “state of mind”. I sent her the song and she liked it a lot. So (fast forward) – one day (after we got married) I stumbled upon the song again, a got that idea of covering it. She supported me, even though it’s not her favorite genre. We recorded music and vocals in our little house studio, then mixed and mastered the song at Metro37 Studios in Detroit, with Kevin Sharpe, who produced my music since 2008. It was never meant to be anything more than a reminder, an audible reference to those early days of our relationship, something we did just “because”… But people liked it and started paying attention to it. Of course, I’ve legally registered it with writing credits going to Indigo Dying. Then we did the video, directed by Scott Sprague (one of Detroit’s top fashion/music photographers) and featuring David Dupuie, one of the best drummers I’ve ever worked with. He is in the video holding a religious sign!

● Other than working with Aleksandra, who else you have collaborated with?
I’ve collaborated with dozens of international musicians throughout the years. I could make a long list of people who were either guest on my projects, or I was collaborating on theirs. The most memorable is definitely my 2 minutes of loud screaming (death metal style) on the song “We all fall down” by Spyderbaby (laughter). It was simply different and fun as hell.

● On your website, I noticed that “AXA” and “INGRAY” were the main stations in your music career. How working with these bands added to your solo career?
Those bands were reflections of who I was back then. Both bands had their moments. AXA won some international festival awards, had dozens of TV appearances, and was leading top charts for months. INGRAY played many hundreds of gigs, from small dive bars to concert stadiums and large theaters, and shared the stage with many popular bands. INGRAY won the title of Hard Rock’s Ambassadors of Rock for Detroit, after beating some 60+ Detroit’s rock and metal bands. We were also featured at Detroit’s Music Awards 2009 as an upcoming act of the year. So both bands were some projects I cared about at those moments, but then I would “evolve” and move onto something more challenging or interesting. I could never just do one thing forever. Everything has an expiration date on it…

● A lot of musicians have to do daily jobs, but it seems that your work as a graphic designer has the same passion for music, am I right?
Yes, I’ve been a creative artist for the last 20+ years. As a sr. Art Director I worked at agencies like Campbel&Ewald, Team Detroit (GTB) but I also freelanced. At one point, I was the 4th top seller on Envato‘s GraphicRiver, I did so many things, from designing a full magazine, designing stores in NY, animating special effects for a Hollywood movie, designing carwash signs for almost every carwash in America, all the way to doing animated ads, homepage takeovers for social media and designing video games. And everything in between. Today I still get offered large creative projects that I have to turn down because I’m too busy with PunkGraphic, a micro agency (consisting of my wife and me) that exclusively handles lots of Nordic marketing services and we don’t have time for anything else. As a creative artist, I was also featured in many magazines, design portals, TV, etc., and have won many design awards, including Detroit’s famous “D” Show award and the OMMA award (on a project that also featured Jamie Hewlett of Gorillaz). I worked on creative projects with many popular people like Toby Keith, Matthew McConaughey, Mike Rowe, Dennis Leary, T.I., and many others. That is always so much fun.

● I was surprised by the number of the received awards. Do you think musicians nowadays care about awards or how many streams/followers do they have on their social accounts?
The whole musical landscape (as everything else) changed. It’s all about influencers, social media, click, and likes. People make fools out of themselves just to get more views and shares. You no longer need a college degree to get well-paid jobs, because young billionaire CEOs don’t believe in education, since they have none. It’s a strange time we live in. I am not sure that I’m liking it so much, but my daughter will probably love it. At the age of 3, she handles our home technology better than I do. I give her my phone to watch Mr.Bean and 2 minutes later she is playing a game she found (that I didn’t even know I had) and killing it (laughter).

● No one can deny that the digital world now is part of our world. Do you think this helped the industry or you prefer it as it was back in the 90s and early 2000s?
That’s a good question. There are days that I really miss pre-cell, pre-internet days when kids were playing outside and the sun was shining over bright blue chemtrail-less skies. But then again, I couldn’t imagine my current life without the latest computers, tablets, large flat monitors. Also music-wise, you would need some $20,000 in gear (and a lot of space to put it in) to make the same recording that you can today make in your bed, on a laptop with headphones. I guess I miss the social and human part of the early days, but I admire and use today’s tools for making music and creating designs. I prefer today’s tempo of life too. I think I adapt fast, but I will never dance for TikTok (laughter)

● Was ‘One Last Call’ soundtrack your only experience on such a path?
No, that was my second film soundtrack. The first one was 2002’s “Escaping Otis”, a movie that was shown at Sundance Festival. Also an Indie. I scored more films after One Last Call, but that one is dear to me because I was at some personal crossroads while working on it in 2010. An interesting thing about that short film (24 min long) is that I wrote the big part of the script too, I’ve edited the film and appeared in my cameo role of a priest, digging a grave in the middle of the night. I made the story too complex, people don’t get it. It’s a story of 2 sides of a man told as a tale of 2 seemingly different people who attack a girl at the party, then die in a car accident only to be transferred to “Azrael’s Den”, a bar somewhere between this and the next world. They need to face their actions in order to move on. But the question is: Do they end up in heaven or hell…? But anyway, people mostly think it’s a story about some drunken guys violently attacking a girl, then driving off to drink in a bar with a Satanist bartender who kills them or something. (laughter) The Full film is free to watch on Vimeo and Youtube (if you can find it). We hit some US festivals, and got very nice reviews, 2 awards…

● Finally, since the COVID effect still exists, how do you plan to promote the album?
I had plans of doing a full-length album, but because of all this pandemic crap, I decided to spend time on another single project in a totally different style, genre, and image – called “Romantic cowboy vs. Space Aliens”. It’s a cheesy, corny story about love, justice, and revenge (but without a twist). It’s a sci-fi western saga where I’ve scored the tune, animated music video and it’s kinda getting viral. (26K views in 2 weeks, not too bad). It’s my answer to the lockdowns, frustrations, masks, vaccines, and the invisible masters making decisions about humanity. There are also many Easter eggs, including the appearance of B. Gates, there are outtakes and it’s all done in a comic-style vintage artwork (laughter). It was refreshing to do something different, but now my next project will probably be very aggressive, a death metal single or something. But full-length releases will have to wait for some better days…