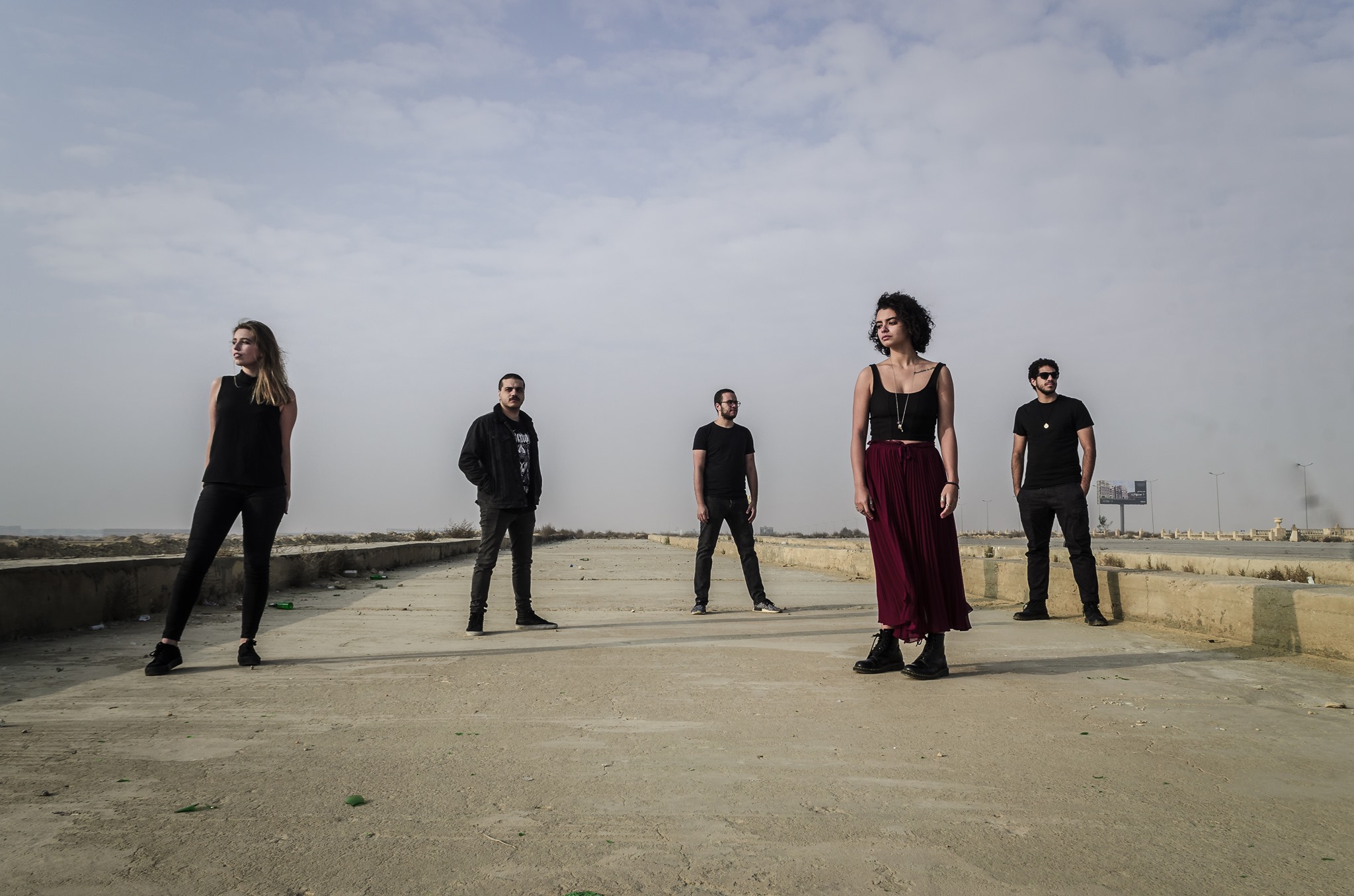 Hey guys! I’m so proud of you really, tell me more about your band story and how did you meet up?

Very Spontaneous! We were all ex-members of a band called Catharsis, Ismail called Fahmy to record Bass for Catharsis, Fahmy called Yahya and Amina for guitar and vocals, and we ended up departing Catharsis, met Emmi shortly after, and formed Amenta together!

Amenta is a very interesting name. What does it mean?

It’s a symbol that represents the land of the dead in Ancient Egypt, a symbol of the west bank of the Nile

Most bands prefer to go back to their nation’s history, why did you choose greek mythology?

Fahmy: Every band in Egypt just has to make it on something related to Ancient Egypt, not just that, but even the international Tech Death Metal scene has bands that talk about Ancient Egypt. I really don’t believe that metal bands in Egypt should purely be known for their ties to Ancient Egypt. We thought that Amenta will follow these bands, but decided not to (but kept the name). If American bands can get inspired from Ancient Egypt, then why can’t we do the same?

Ismail: We are a band that is trying to do something new, which we think is going to break the stereotypical and critical nature that the Egyptian scene has grown to adopt. I believe that a lot of bands strive so hard to achieve a certain theme that would be accepted by the old members of the music scene here in Egypt. Amenta, however, aims to create something which is comfortable and caters to the interests of each member without specifying a certain interest or certain genre we want to pursue. That’s why the word ‘Experimental’ is right there when we wanted to identify what genre we play in.

Pandora’s box is one of the most interesting topics indeed, but does this story mean anything to you?

We’ve all previously dealt with people on our paths who seemed to be heavily inclined to follow their weaknesses or project them on each of us. This has happened many times in all of our lives and in our musical paths as well. So this is a topic that hits a spot for all of us.

As you know, English has a bigger audience worldwide. Tell me, Amina, why did you choose to make it in French? Although it’s a nice touch with the English back vocals, still, you preferred French for verses.

Unfortunately, we parted ways with Amina, but originally the idea was from the rest of the band, in which we decided to use Amina’s fluency in French to do something different. We recently recruited Mary Darwish as our new vocalist so you can expect our next releases to be fully in English. We’re gonna try to work on something different for Mary’s vocals to make it a bit unique and see how that pans out.

The mixing and arrangement are really nice, were you using external plugins or you played it live?

We have our own gear to record with and we would meet in each other’s houses to finish the job in terms of structure. Most of the Bass was pure analogue as he is a total gear head. For guitars, the DI signal is recorded live and processed with external plugins. As for orchestration and Oud, they were external plugins with no live recording. The progressions were actually composed on guitar and written on a DAW with the plugins.

Tell me, Emmi. Is it your first time to join an oriental metal band? How did you reach the guys and started jamming with them?

Yes, it’s my first time playing metal! I wanted to find musicians in Cairo so I made a Facebook post, not specifying any genre, and Youssef replied to it saying there is an oriental/sludge metal project he was working on. Now, I had no idea what that meant concretely, but it sounded interesting and I was excited to try something new and to develop as a musician. And then once I met everyone and jammed with them I really enjoyed it. I thought there was a lot of potential in all the ideas everyone had and a lot of space for creativity so I was happy to join the band.

Well, you’re working on your album now, are you aiming to represent Egyptian mythology or will you focus on the Greek civilization only?

Actually, we’re writing currently on a theme with an emphasis on Nordic mythology. The theme is a mix of Agalloch’s album The Mantle, combined with Animals by Pink Floyd, mixed with Michel Foucault’s philosophy of discipline, torture and authority. We might add Egyptian Mythology down the road, but we’re unsure as we usually come up with the topics and lyrics after the instruments are done and dusted.

During your songwriting for the album, are you considering adding some solos?

The way the guitar area is divided into Amenta is not very defined. Neither Yahya nor Ismail are identified as a specific lead or rhythm guitarist. We are aiming to have solos down the road, but since we are both heavily involved in the songwriting process we prefer to put simple lead lines and let the ambient elements take the lead in grasping the listeners’ attention.

As usual, artists use live gigs to promote their music; still, this year seems unclear based on the current situation. Do you have any alternatives to promote for your releases?

Live shows are not very much in our interest right now in opposition to possible PR campaigns we are currently looking at to promote our album once it is released. We believe that a PR campaign will help us have a bigger reach worldwide, which seems like a more lucrative idea than having local live gigs. Of course, we all love getting on stage and playing live, but in terms of marketing our music, a PR campaign sounds much better.