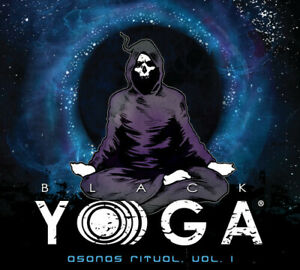 What’s the first thing that comes to mind when you hear the word “Yoga”?Nature, beach, relaxing music, burning incense sticks and fragrant candles, *Awooommm* sounds… and mostly for ladies, right?

But what if I told you there was Yoga specialized for Rockers and Metalheads, would you believe me? Well, guess what it’s true! For both Dudes and Dudettes!

200-hour RYT-certified instructor, Kimee Massie, brings us her own re-creation of this relaxation technique, naming it “Black Yoga”.It seemed weird; yoga can’t be black, can it? And what’s with the Sunn O))) logo similarity? Upon reading more about it in detail, it seemed interesting. For example it’s described, as a vinyasa style yoga set to drone, noise, stoner metal, ambient, industrial, space doom, and other traditional meditation music. It incorporates basic poses in a relaxed environment, while focusing on safe body mechanics. The best way to describe Black Yoga is that the movements are actual yoga movements – I googled some of them – but the music and overall atmosphere are really dark, the music is actually quite similar to Sunn O))) but with less metal and more ambiance and the lights are as dim as they can get.

First, I was greeted with the quote “You can’t fully appreciate the light until you understood the darkness”. Upon a quick Google search, I found that it was originally written by Madeleine L’Engle as “Maybe you have to know darkness before you can appreciate the light.”

I was then instructed to darken the atmosphere around me, as they use a few purple/blue lights, but you don’t usually have these around the house so I settled in for a small bedside lamp.

Now to be honest, watching the first few minutes of one of their sessions gave me the “jeepers creepers”! – Yes, this coming from a good horror- flick fan.Back to our topic; the session is set in a dark room that may resemble that of a cult gathering you see in the movies – adding soundtrack if you may -but after going further into the video, it started to shed some light to me. Kimee basically created an atmosphere where her yoga members could feel comfortable in, not the cult thing, but the gloomy comfort of night’s beauty and darkness; that in a way reflects what some of them try to hide away or battle through, from depression and anger to alcoholism, drug addiction and phobias. I guess you could say Black Yoga is a refuge or sanctuary for them, and of course for all metal lovers, with all the screaming, heavy drumming/guitaring and head-banging, both fans and band members would need some time off and find a relaxing place to shed all that stress and heap of energy off.

According to Kimee Massie, “Darkening the music may start to bring those darker emotions out of us”. This last line caught my attention, because it is quite theorized that people listen to dark music such as metal and ambient music to bring out their extreme emotions, which seems to be the case with dark yoga as well.

You are then instructed to follow her moves and coordinate your breath, relax your muscles, etc. Now as a complete yoga beginner and the total opposite of a fit guy, I couldn’t finish half of the first video (which is 1 hour and 7 minutes long). However the time I spent doing yoga was quite the fun experience. I never thought yoga was that physically demanding. It felt like quite a tough workout. But did it actually make me feel better? Well it did, but to an extent. See? It felt good, and it made me feel less anxious about the ton of homework I’ve been procrastinating for a couple of days but it’s not magic. I’m not euphoric or high, I just feel better. This feeling was amplified by the good music droning along in the background. But it wasn’t too impressive.

However I have a few minor criticisms, like the weird camera angles that make it hard to follow the instructor or class at times, and the fact that they didn’t say that I’ll need a block to use while working out. I’m almost certain that they’ll fix the latter issue in the final release though. The sound quality on her microphone wasn’t perfect either, it’s not bad, but it could’ve been better.

My final verdict has to be that it was a fun experience. Would I do it again? Probably not, but it’s because I’m not that interested in yoga and similar physical activities, I’d rather go swimming or go to the gym than workout at home or at some class. However if you enjoy yoga, you should give them a shot, Kimee Massie is a certified instructor and she knows what she’s doing. Just make sure you aren’t afraid of the dark or ambient music!

Kimee and her husband, Scott Massie, came up with the whole thing on a road trip listening to the Bohren and der Club of Gore’s, Midnight Black Earth. In mid-2014, they embarked on putting together the Black Yoga Meditation Ensemble, an eclectic group of metallic hippies and doomlords, to produce a more personal and specific soundtrack. The soundtrack also includes from members: Storm King, Veniculture, Agnes Wired For Sound, Moonstation Burning, Vulture, Death Crawl, Complete Failure, Hero Destroyed, Filth on Demand, Secant Prime, eMay, Crown of Eternity, Torrential Bleeding, and more, to create a heavy meditative space & help participants return to & lead a more healthy fulfilling lives.
So, what do you think? Would you join in?