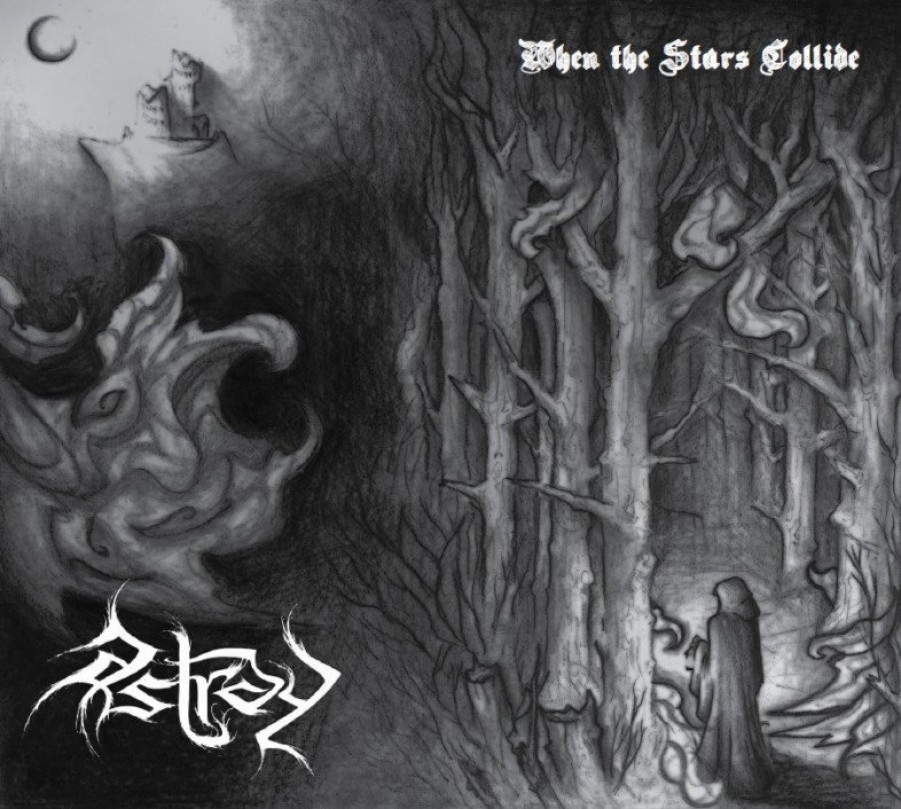 Astray is a new Depressive Black Metal band that was formed in 2014. It is the second mutual project between Egypt and Italy after Hateful Desolation.

The Members of the band are Void from Egypt, Veirg and Azghâl from Italy. The Band released their first Full-Length entitled When The Stars Collide in February via Self Mutilation Services and Throats Productions. The Album contains five tracks, in addition to an intro for the album.

Let’s start with the ‘intro’ of the album. The track begins with atmospheric touches relying on the sounds of thunder and rain then followed by magical keys; the keys gets you ready for your journey through your soul, it forces the flood of memories and bad experiences ready for haunting, your soul starts to sigh. As for me, I expected that the band will start the intro of their album with Keys or an Acoustic guitar and the band chose the right start.

The Second track was ‘Astray’, I mistook the first few seconds of the track to be the rest of the ‘intro’, but what I thought changed in a second when the music started with Void’s vocals. The music expresses someone escaping under a heavy rainy weather, his nightmares and pain following him. The riffs of the track turned faster from 1:09 till 2:13 to reflect the flashbacks occurring. From 2:45 till 3:16 there was an interlude by keys and orchestral touches with clear bass lines and some whispering. At 4:20 till 5:06 there is a spoken part with shouts and screams from the suffering soul, moving on to the end to the track the riffs became slower than the rest of the album. It’s the silent screams and still the clear bass lines have their appearances and the track ends with the same atmospheric touches it started.

The following track was ‘Cold Dawn’. An amazing beginning with keys and clean vocals till 1:37 to express fake feelings of hope or the calm before the storm, I found in the drumming and the riff at this part affected by folk music. The Storm begins at 1:38 with really cold riffs to express the coldness of the storm; I liked the harmony between the keys and the guitars. From 4:39 till 5:38 we’re back again to the same style we’ve started with. I should mention that the tunes of the guitars were perfect, they played a great role in attracting the listener and forcing the mind and soul of the listener to enter the atmosphere of the track.

‘The Hunting Illusion’ was the fourth track of the album. The track starts with an acoustic guitar till 00:50 then the rest of the instruments mashes in, it was one of the fastest tracks through the whole album. It carries the same style of ‘Astray’ track but ‘The Hunting Illusion’ had an interlude from 5:05 till 5:42 with atmospheric touches and whispering.

‘When The Stars Collide’ was our next station with Astray‘s first full length. Tim Yatras was a guest vocalist for this track. The track begins with an Acoustic Guitar intro and I found that the riffs of this track were the deepest of them all, like you are running in a vintage forest in the middle of a rainstorm, a stream of lies on your left side while you’re finding your way through the tress. The track also carried an interlude from 3:14 till 3:53 with keys and bass lines and atmospheric touches, in addition to the solo. I loved the way whole instruments and synths were mixed and the variety of vocals and pitches, I think it was the best track throughout the whole album.

The Last track is ‘Descending Into Oceans Of Despair’; with a symphonic intro, I can’t deny my admiration. Using the violin and the flute with suitable measurements of the drums was something perfect. The track was depressive mashed with symphonic. The solo at 3:19 was great. I loved the way of the guitar, how it wanted to be the king of the instruments. From 6:02 till 7:36 was a magical interlude with the keys and violin reflects the inner peace, tears of relief, moments of burden releases, you are flying through other world, secret world, no one knows expect you, the rooms of your mind, the chambers of your soul then the inner begins with a fast guitar tunes and drums and high screams. Then we back again to the calmness with acoustic guitar and bass with whispering and spoken part to declare the end of your inner war and the end of your journey through your soul and this is the end of Astray‘s first full length When The Stars Collide.

When The Stars Collide is really a nice piece of art, I liked the variety between vocals, the harmony between the instruments, the atmospheric and the symphonic touches and the solos. However, last track left me wondering if the intro was matching enough. I give it a score of 8.5 out of 10 and of course this album is highly recommended.