From a small city in the Swedish woods, the Melodic Metal Band Exogenous emerged. What started as a hobby project slowly formed into a serious band with the highest goals. Demos were recorded in 2013 and 2014, and a few shows were played from 2015 and onwards. After a time of definition and progression, Exogenous is finally releasing their first official record, Identity EP.

Their style is melodic metal, with characteristics of metal-core and post-hardcore. While the final preparations for releasing Identity are being made, Exogenous are also working on new material for a future full-length album, as well as playing gigs, promoting the EP. Identity will be distributed both physically as hard copies and digitally, with official release May 26th, 2017.

This whole album sounds like a theater performance, each song has a part in it. The album has a lot of acoustics which had improved this kind of enjoyment in a right way.

Since it isn’t a concept album, it doesn’t have a theme that was thought out beforehand. However, you could in a way say that it is about getting to know yourself and finding your identity in this world. 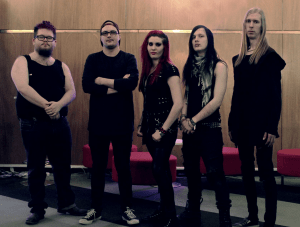 The first song of the EP ‘Meet this End’, is about the fear of dying; having regrets, and feeling like you are not ready to pass on. To still have so many things you want to do in this world. It is a song full of anxiety.

The second song is the album’s name, ‘Identity’. It is about finding yourself, understanding the way you are and accepting it. About how you shouldn’t change for someone else, you should just be you no matter what others think and feeling different.

The third song is called ‘Illusion of Happiness’. It is about how feelings, thoughts, and ideas can change depending on how you look at them over time. How easy it is to fool yourself into thinking that you are happy when you are actually not. About not being able to trust what you see and feel. About illusions.

The fourth and final song of the EP, ‘Freedom’. It’s about differences, how everyone is different in some way and that it should be okay, and how people could sometimes think it isn’t. They discriminate and treat you poorly for not being like they think you should be. This song is about fighting for your freedom to be like how you want. 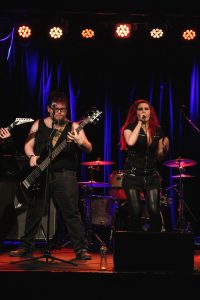 Music wise the band has excellent command of their instruments and their genres blend very well between melodic and hardcore. The bass and drums beats compliment the lyrics, sang by Linda and Voffe; who mix their harsh and clean vocals extremely well with their intros and outros.

Exogenous are a band that nobody should pass up on, and every rock fan should take a sense of pride in. With this record, they ensure that everyone will soon know who the best new band in rock music currently is. Not only that, they are doing everything on their own terms in their own way and it is only a matter of time before it is going to be too late to see these guys in small places. This band is going to continue to grow and when you consider that this is only one of the first steps on the journey, I for one can’t wait.