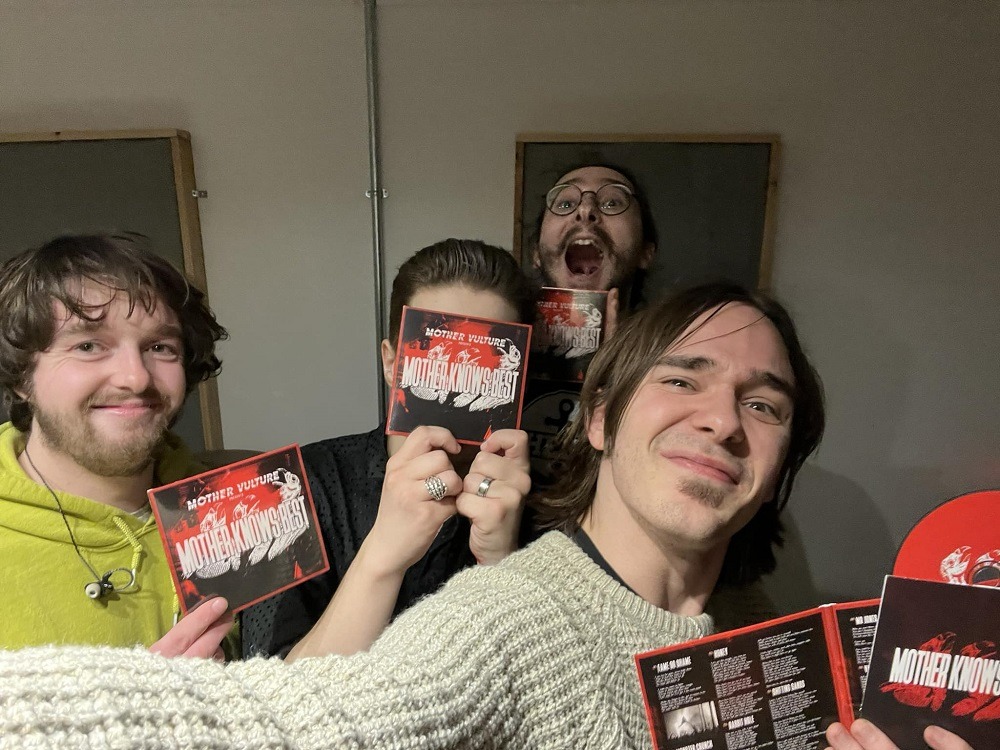 After touring the UK several times and playing lots of festivals, Bristol-based Rockers Mother Vulture have just released their debut album entitled “Mother Knows Best”. The album spans a total of 12 tracks that share a common vision and style but show some variation in certain elements that make it really diverse. Take for instance the opening track, Fame Or Shame, which pays homage to 80s Hard Rock and Glam Metal with all the anthemic/arena vibes while still having a modern flare. The basslines and the vocals will remind you of Stone Sour or Alter Bridge, and that serves to prove how good the range of the vocalist is…as he goes from soaring high screams to deadly growls. The second track, Monster Church, has the more straightforward approach of a standard Hard Rock tune. The song keeps this pace for about a minute and a half of thunderous drums and harsh vocals, before surprising us with the heavy breakdown in the last 30 seconds. It seems like these guys don’t like predictable songwriting one bit. Honey has a pissed-off attitude, stompy drums, and 70s-style guitars all of which are connected by an impeccable bass line. This is definitely a song for the arenas, especially with the easy-to-follow chorus and the backing growls. Once again these guys refuse to end the song in a boring way and spice things up with a nice brief instrumental/breakdown.

Rabbit Hole is the epitome of what modern arena rock songs should sound like. It’s my favorite track on the album by far as it reminds me of another band I love so much – Skid Row. The bass guitar here almost made my speakers crash, and to top it all off there was a section with added percussions and growls/screams that added to the hardcore nature of the track. Big Bad goes back to melodic guitar riffing and fast-paced drums. By this point, you can tell the album almost has no dull or repetitive moments, but the breakdowns that are in most songs to add variety have become a predictable tool on their own. A very enjoyable one nonetheless. Shifting Sands lives up to its name and really shifts from the aforementioned formula into being mostly fast-paced and the breakdown/bridge is the slower part of the track. It made a really cool variation while sticking to the hardcore elements. Mr. Jones is another short track but it leaves a strong impact. The 2-minute banger has strong punk-ish elements and very powerful screams that go along with its fast drums and bass.

Vile Breed is not as fast as the previous tracks but it’s much heavier. This time the hardcore punk influence takes over and the screams. It’s one of those tracks that you listen to once and then it leaves you energized for days afterwards. Not Yet is a very special-sounding track because of its slow tempo and guitar effect that give it an overall ominous vibe. The first thing that comes to mind when you hear the guitar line in the verses of this song is the comeback 2013 track from Black Sabbath “God Is Dead?”. The second to last track, Put Me Down goes back to the 80s feel with the high-pitched vocals and melodic guitars but also keeps it modern alternative rock/alternative metal feel. A short interlude is played before the twelfth and final track, Homemaker, goes back into the arena rock vibes. It reminds me so much of the track “Crash” by Fit For Rivals. The track is filled to the brim with awesome bass lines and powerful vocals that literally end the album on a high note. All in all, this is an album that doesn’t really follow a formula but rather a number of elements that connect the tracks together and gives the band that much-needed characterization that the record would’ve been boring without. This album is a prime example of how you can write a record that comprises many influences and genres and make each of them sound on point.

Ada by Andrea Pizzo and The Purple Mice

Out Of My Hands by Bonze