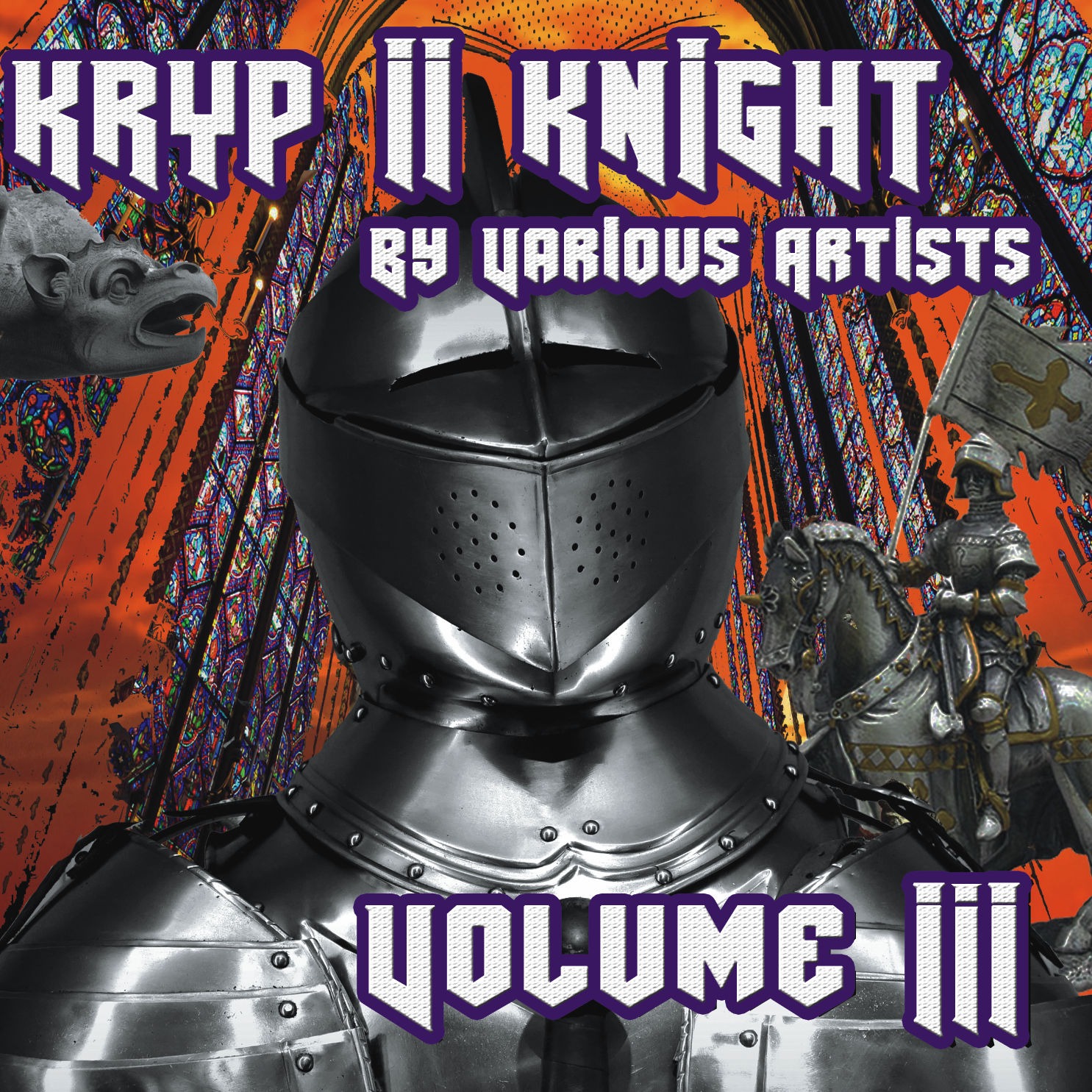 The latest album in the series made by Bong Boy Records is entitled Kryp II Knight Volume III, and it features 11 different tracks by various rock and metal artists.

Those who know me well know I love anthology albums. Some of the greatest discoveries I made were through tribute albums and Record Label compilations- Tale Roadrunner united by Roadrunner Records for instance. This album is made up of 11 tracks, none of which sounds like the other. Although the band OBLIVEA has two tracks here, even those do not sound the same. I can promise you this record has moments from select areas and time periods of the rock and roll spectrum and it’s just great how they all fit together and feel related through one thing: PURE ROCK AND ROLL.

Sounds like gimme shelter by the Rolling Stones, only if it was written by Queensryche. The chorus is super catchy and the song has an overall balance between heaviness and melodic rhythm. The saxophone solo was unpredictable. The simplicity and straightforward nature of the track make it perfectly qualify in the Hard Rock genre- imagine your favourite 80s artist with a live sold-out stadium show where everyone is singing along to these angsty anti-establishment lyrics.

Begins with an odd time signature and a very Judas Priest-esque solo, then the surprisingly modern vocals kick in. I have a thing for bands that sound modern but pay homage to traditional Heavy Metal such as these guys. The fast spoken/rapped part reminded me a lot of Mike Shinoda of Linkin Park and at this point, I feel like the track lies somewhere in a spectrum between Heavy Metal and Nu Metal. Breathy airy vocals give the bridge more emotional qualities and memorability. As a result of this, the last track goes really hard. The bass and drums are definitely the stars of this track because of the complex, yet easy-to-follow rhythm they sustain throughout the song. This feels like a song straight out of 2005 from the prime eras of Shadows Fall or Disturbed.

High-pitched and powerful lady vocals lead the beginning of this track into a typical Alternative Rock/Hard Rock intro riff. The lyrical theme is a messed-up relationship, which I believe is one of the least spoken about topics in the Rock and Roll spectrum. The attitude and angst suit the story of the lyrics so much and the hard-hitting snare drums had a very punk-ish feeling to them which made me rock out pretty hard to this track. The lead vocalist has amazing control of her voice and sings super high notes with ease, in the middle of spoken word sections which make the story sound all the more authentic and emotional. My favourite thing about this track is the sweet guitar melody that starts with the bridge and intertwines with the beginning of the last chorus. I would love to hear more of this band and their attitude, but for now, I’m keeping this one in my playlist for my car rides

4- “The Outsider” by Maryann Stefanik

This track is a mix of Ska Punk and 2000s Pop-Punk, but somehow I also felt its main guitar riff and lyrical theme makes it suitable for a neo-noir movie. The most unpredictable thing about this song was the raspy contralto vocals of the band’s front lady that make the song feel ominous and mysterious. The rhythm is never lost and there never is a dull moment on this track, which made me think it will surely be a crowd pleaser at concerts.

The song begins with piano and soulful vocals that set the stage for a melancholic story about lost love. After the second verse and chorus are done, a tear-shedding guitar solo begins with a lot of word painting and twang which sends shivers down my spine. These guys know how to capture feelings with their instrumentation. The final lyric “Forget the tears of yesterday” is followed by masterful adlibs and vocal runs with the word “Warm” solidifying Dave Edwards as one of the best vocalists I’ve heard in my entire life.can’t find the right words to describe the level of emotions or a similar vocalist to compare him to. I’m already grateful for this record for making me discover Mr Holmes and Mr Edwards and their impeccable talent. Kudos to the rhythm section of the band for making this sound like a successful 80s power ballad.

6- “(Just) Another Dance in The City” by The NEW Bardots

This one is not just another track on the album, and the band is definitely not playing “the same old tune”. This song begins with a cool lead line played together by the guitars and what sounds like a harmonica/melodica together and it makes the sound so fresh. The vocals take one bar followed by the guitar and harmonica which reminds me of Aerosmith’s classic Dude Looks Like A Lady. The vocalist showcases amazing use of a Nasal head voice with a bunch of rasp, all of which make his higher notes sound powerful and gritty. The bassline and drums are purely hard rock and carry the track powerfully, but the harmonica was the most remarkable element for me here.

In a 2000s pop-rock fashion, Underground Treehouse hones his vocal strengths and amazing style. The song’s catchy and upbeat bassline makes it suitable for dancing at parties. I thought of the song Dance, Dance by Fall Out Boy while listening to this. But other than the dreamy voice and amazing bassline, the drums and guitars also pack a great punch. The lead melody changes a bit with the bridge and changes a little bit at the start of the last chorus. A pretty strong yet easy listen.

The track begins with some alternative rock and southern rock vibes. The vocals are under a cool effect that sort of muffles them. This is accompanied by a “wah pedal” on the guitar that they used along with some reverb and delay on the guitar solo, which was the track’s finest moment for me. The lyrics are a  romantic poem which was wholesome and had the right attitude. The bass and drum lines created a cool foundation for these guitars and vocals and the overall sound is just fine and timeless rock and roll.

Ironically, this is the title of the second OBLIVEA song on this record. But it’s in no way ironic that their “second chance” brings a better and stronger offering. The song has more Nu and Alternative vibes with the style leaning more towards Breaking Benjamin and Chevelle here. The heaviness is generated by a high level of overdrive on the guitars as well as a strong bassline. The unpredictable section here was the melodic solo, where the guitars were soaring and the feelings were all over the place. I could feel the vocalist’s sincerity and humility with the apologetic nature of the lyrics- nothing’s more gripping that shows emotional vulnerability like this.

The song begins with an odd keyboard sound and a guitar tone that can only be compared to Kenny Hickey of Type O Negative. The vocalist’s low-pitched voice touched on a Peter Steele Vibe as well. The song’s reliance on keyboards and the speech interlude in the middle of it put me in a scenario where I felt like those covid killers are some sort of zombie hunters. It has so much badassery and a Heavy Metal attitude to it. The raw recording sound and the arrangement of the keyboards that are high in the mix make this hard to categorize. But it’s safe to say this is experimental Alternative/Hard Rock which pays some homage to Heavy Metal.

11- “Edge Of Eternity” by Grits Guitar

This is the record’s longest track (9:47) so It took me multiple listens to properly break down all the events that take place in this single track. The first couple of minutes already had me hooked to the melodies that feel improvised because of their fluidity. This man’s nothing short of a virtuoso. His style meets somewhere between Zakk Wylde and Steve Vai, wherein the emotions are depicted by a level of skill and articulation which is highly impressive. One thing I noticed was how the second half of the track has some additional melodies by a piano/keyboard.