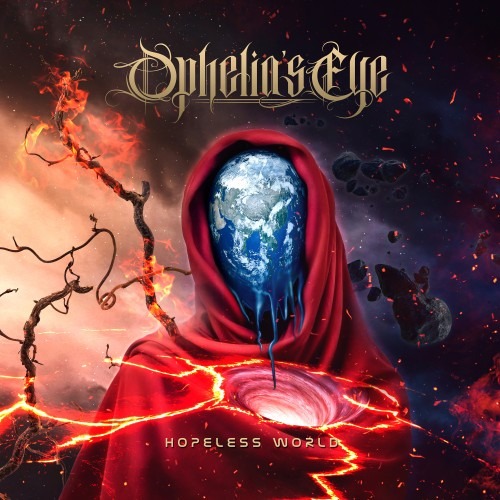 “Hopeless World” is the first full-length feature from the Swiss Melodic Death Metal outfit “Ophelia’s Eye,” and it’s a record that deals with some heavy and personal subject matter. The 6-track endeavour brings together elements from many diverse areas of death metal. From chainsaw-sounding riffs, probably influenced by Entombed, to fast thrash-y bass lines and drums reminiscent of Possessed and Death, to what I liked the most here: melodic riffs and choruses that feel memorable and rooted more in a modern metal mentality.

The first track, “My Honor,” begins with a fast riff and a scream that sets the stage for what’s about to come. The track is super catchy and feels like summer metal festival material that forces you to mosh; think “Seventh Swamphony” by “Kalmah” or “Clayman” by “In Flames”. With a breakdown that got me off my seat to headbang as I listened to it, I was already sure this is a record I’ll like.

Then, begins the second track, “Fuck My Trust,” with a more calm intro that reminds me of the track “Nightfall Overture” by “Nightingale,” and then the pace changes and gets faster as the first verse begins, and then the chorus riff follows what the vocalist “Michel Egloff-Sieber” is saying. I love it when tracks have a melody that speaks directly into your soul like this, especially when you have lyrics that describe personal struggles and pain in a clear way like this.

The third track is the title track, and it’s also the longest on this album. It begins with clean guitars alternating with one another in a very melancholic way that feels like it speaks to you. When the rest of the instruments kick in, you immediately feel like the track is talking about someone’s frustration and disappointment even before you read the lyrics. There is a tempo change with a very fast-paced riff that prepares us for a heavy part, then a slow interlude that sounds like the intro, and then more of the faster riffs attack us, leading up to a breakdown. Axeman Remo Lemp and Axewoman Corinne Ryter are every melodeath fan’s dream come true. I have to highlight as well that the varied drum work performed by Mr Stefan Bijkerk here is some of the best I’ve ever heard.

The fourth and fifth tracks, “Human Abyss,” and “I’m Explosive,” are the most groovy part of the album and they both have catchy hooks and both are festival material, but they don’t feel as sophisticated as the first three tracks, and that’s understandable. They feel more like a breather than a filler though, because they have lots of heavily awesome moments and “I’m Explosive” has a very cool breakdown-bridge section.

The sixth and final track, “Pain and Sorrow,” feels like it takes the fast pace of the previous two tracks but adds more layers of melody and melancholy to them in the same way as the first half of the album was. Around the 2:30 mark, we hear a very cool bassline performed by Mr. Sandro Suter and accentuated by the fast and relentless drumming by Mr. Bijkerk.

In conclusion, let me start by saying that this is an album I loved thoroughly. This is one of those records that has it all. The album shows how the band is capable of making modern melodeath with some metalcore elements that will appeal to fans of The Agonist and Black Dahlia Murder, as well as groovy OSDM-infused tracks that are stompy for fans of modern era Obituary, this style or that one might not be for everyone, and this just serves to prove the range these guys have.

The title track reminds me of Dark Tranquility’s magnum opus “Insanity’s Crescendo” -in the sense that every metal band has a song where they pour their heart out both musically and lyrically-and it will probably become a staple in the live shows or maybe even the show-closer that fans will be screaming and waiting for. This band relies on writing very personal lyrics rather than hiding behind misanthropic metaphors and angsty innuendos like some bands do, and I highly appreciate the atmosphere they created on this album and hope to see them get the recognition and praise they deserve for this album.